Under the category of necrotic cell death, there are many well-characterized, as well as some newly described, processes of cellular destruction. Contrary to classical thinking, necrotic cell death is not always physical and accidental in nature. Cells may trigger specific programmed self-destruct pathways when they are under stress and other methods of cell death are not feasible. 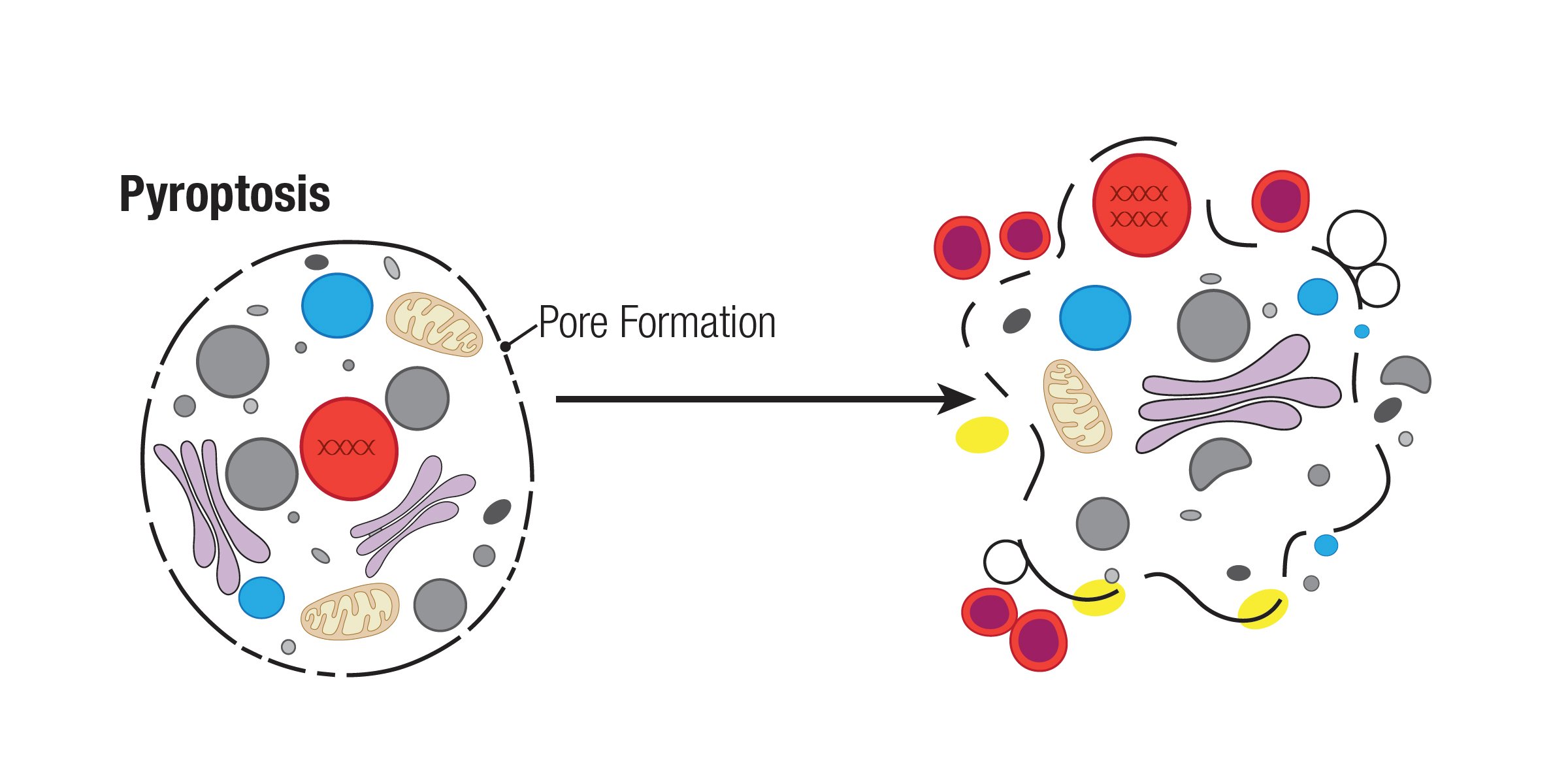 Pyroptosis is a type of programmed necrotic cell death that is activated upon intracellular infections from bacteria, viruses, fungi, and protozoa in the presence of pathogen-associated molecular patterns (PAMPs) or cell-derived damage-associated molecular patterns (DAMPs). It is typically induced in cells of the innate immune system, such as monocytes, macrophages, and dendritic cells. Pyroptosis is often the primary mode of cell death that may be triggered upon pathogenic infection, and it is thought that other types of cell death, like necroptosis, occur as a secondary process when caspase enzymes are not available. Cells that undergo pyroptosis display morphological characteristics such as cell swelling, membrane blebbing, DNA fragmentation, and eventual cell lysis. However, the nucleus often remains intact, which differs from the nuclear destruction that can be observed during apoptosis and necroptosis.

Pyroptosis is mainly characterized by the N-terminal cleavage of gasdermin D (GSDMD), which results in its oligomerization to form a lytic pore in the plasma membrane. This cleavage process relies on the activity of inflammatory caspases 1, 4, 5, and 11, which are different from the caspases that are active during apoptosis. Thus, monitoring cleavage of GSDMD and its related family members, as well these inflammatory caspases, is key to studying pyroptosis.

The inflammatory caspases play an important role in the innate immune system and enable immune cell response to bacterial infection, as they are involved in processing and secreting pro-inflammatory cytokines, such as pro-ILβ and pro-IL18.

The canonical pathway of pyroptosis is often described as occurring through a two-step process. In the first priming signal step, NF-kB is activated to induce the expression of a number of proteins that will become part of a complex called the inflammasome. Inflammasomes typically consist of a cytosolic-pattern recognition receptor (PPR; such as NLRP3, or AIM2-like family members), an adaptor protein (ASC/TMS1), and pro-caspase-1. Analyzing the activation of the inflammasome via the detection of NLRP3 and visualization of ASC speckling is another useful technique to monitor pyroptosis.

In the second activation step, caspase-1 is proteolytically activated before cleaving the cytokines, pro-IL1β and pro-IL18, creating their pro-inflammatory forms, IL1β and IL18, which are secreted from the dying cell. Visualizing the presence of these important cytokines can be achieved through the use of specific antibodies. Importantly, caspase-1 also cleaves the N-terminal fragment of the key protein gasdermin D (GSDMD), allowing it to oligomerize and form a pore in the cell membrane. This leads to the secretion of cytokines, influx of water, and eventual cell rupture.

Alternatively, pyroptosis can be induced via the non-canonical pathway by the intracellular detection of Gram-negative bacterial LPS, which activates caspases 4, 5, and/or 11 (mouse caspase-11) to cleave GSDMD. Since GSDMD is cleaved in both the canonical and non-canonical pathway, monitoring the cleavage and translocation of GSDMD is an important part of identifying pyroptosis.

Investigating the mechanisms of pyroptosis may result in therapeutic benefits for cancer, autoimmune, neurodegenerative diseases, and more. The potential for pyroptosis to mediate cancer is evidenced by research demonstrating that omega-3 fatty acids activate pyroptosis in triple negative breast cancer cells; however, the mechanism remains to be elucidated. In inflammatory bowel disease, activation of the inflammasome and caspase induction is indicative of pyroptosis, and this may also be a promising direction of research to develop novel therapeutics.

To learn more about the mechanisms, morphology, and key proteins involved in various types of cell death, download the Researcher's Guide to Mechanisms of Cell Death.

The Role of Neural and Glial Cell Markers

The COVID-19 Pandemic: Why Science and Common Sense Matter