In humans, hematopoietic stem cells (HSCs) continuously replenish all types of blood cells via a series of lineage restriction steps. This process begins with the production of common lymphoid progenitor (CLP) and common myeloid progenitor (CMP) cells, which subsequently differentiate further in response to various stimuli.

To learn more about cells with a myeloid lineage, read our blog. Cells of the lymphoid lineage include T and B cells, which are involved in adaptive immunity, and natural killer (NK) cells, which are part of the innate immune system.

To understand how different lymphoid lineage cells function in conditions of health and disease, researchers must detect and quantify distinct cellular subtypes within a heterogeneous population. This can be achieved using antibodies for cell type-specific markers, allowing cells of interest to be visualized using techniques such as flow cytometry or immunohistochemistry (IHC). Common marker classes include cluster of differentiation (CD) molecules, transcription factors, and chemokine receptors. 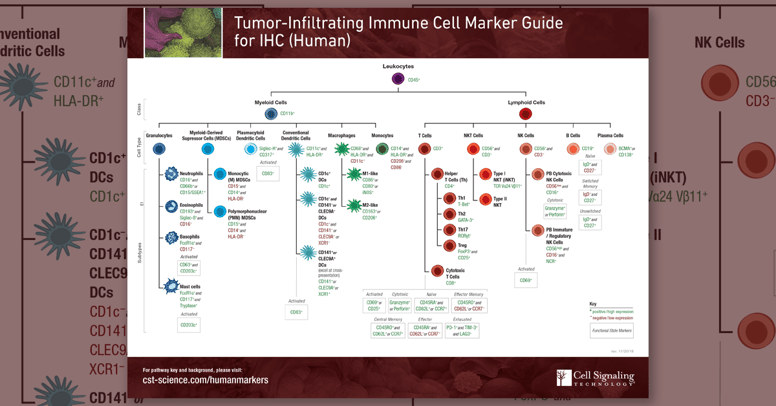 Although broad subsets of lymphoid lineage cells can be characterized using just one or two markers, identifying specific cell types within each subset often involves detecting defined marker groups. For example, all T cells express CD3, but upon differentiation into cytotoxic T cells and T helper cells, these cell types express CD8 and CD4, respectively. T helper cells are sub-categorized based on the presence of additional markers, with Th1 cells being identified by expression of T-Bet and IFNγ, Th2 cells staining positive for GATA-3 and IL-4, and Th17 cells expressing both RORγt and IL-17. Other major T helper cell subtypes include regulatory T cells (Tregs) that are characterized by expression of FoxP3 and CD25, and T follicular helper cells (Tfhs) that express Bcl-6, CXCR5, and IL-21.

Like T cells, B cells can be identified using just a single marker, in this case CD19. However, distinguishing between naïve B cells, plasma cells, and memory B cells again involves detecting different marker combinations. While naïve B cells are positive for IgD and negative for CD27, plasma cells are characterized using either BCMA or CD138. Memory B cells exhibit differential expression of IgD and CD27 depending on whether they have undergone class-switching (IgD- CD27+), or not (IgD+ CD27+). Like memory B cells, NK cells display differential marker expression according to cell function.