Immunology: Can we re-train our T cells to attack cancer?

Immunology: Can we re-train our T cells to attack cancer?

The human immune system comprises an array of ingenious cellular components and mechanisms that collectively protect us from harmful exogenous pathogens. Harnessing this power to attack and treat cancer is an intense area of research. Understanding why cancer cells normally evade immune surveillance and developing strategies to help the immune system distinguish between tumor cells and healthy tissue may lead to the development of highly efficacious therapies for those afflicted with cancer. 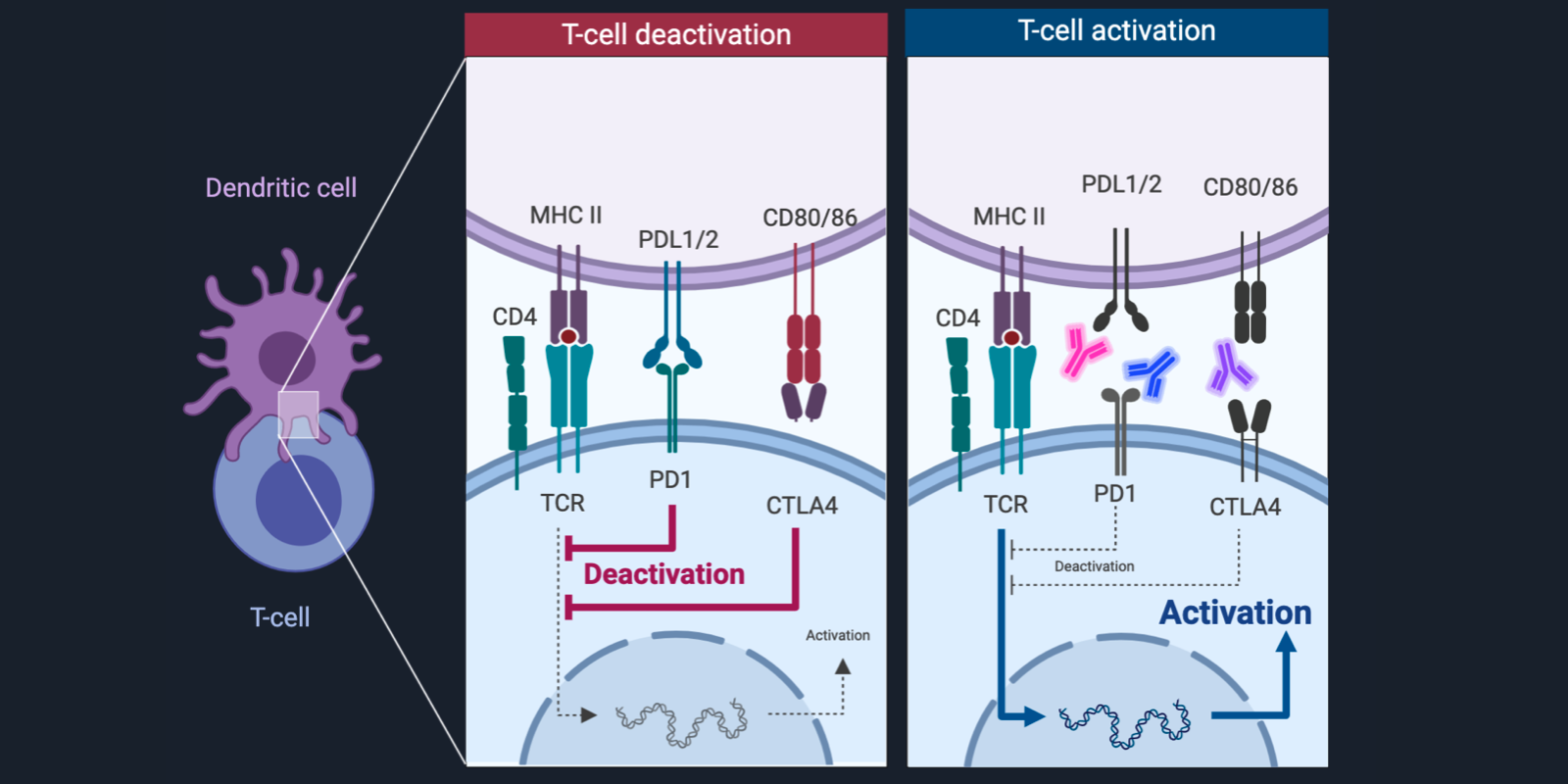 How does the immune system differentiate between foreign pathogens and self-antigens to prevent collateral tissue damage during an immune response? One way is by employing a series of immune checkpoints — or built-in control mechanisms — which regulate the balance between local stimulatory and inhibitory signals. Many cancers take advantage of this system by expressing checkpoint ligands on their cell surfaces, which essentially enables them to hide in plain sight. In fact, cancer cells can employ several mechanisms to avoid immune clearance — including mutations that render cells more difficult to recognize as harmful, expression of proteins that directly turn off immune cells, and altering the surrounding tumor microenvironment to suppress the immune response.

A recent focus of current immunotherapy involves targeting the signaling checkpoint proteins that normally prevent T cell activation and response. One example is programmed cell death 1 protein (PD-1), which plays an important role in immune tolerance and can be adopted by cancer cells to escape immune surveillance. PD-1 is a cell surface protein that is activated via binding to the PD-L1 and PD-L2 ligands, which initiate intracellular signaling that suppresses T cell activation. Consequently, blockade of PD-1/PD-L1 and PD-1/PD-L2 interactions has successfully been developed as a therapeutic intervention for a variety of cancers.

Another approach to mobilizing the immune system to battle cancer is to use adoptive cell therapy techniques, in which a patient’s own immune cells are expanded and potentially modified to target cancerous cells. One example is chimeric antigen receptor T (CAR-T) cell therapy. In this approach, T cells are collected and genetically modified to express a chimeric antigen receptor that specifically recognizes the patient’s cancer cells. These modified T cells are then re-infused back into the patient to act as a “living drug” that can eradicate cancer cells by harnessing the cytotoxic abilities of T cells. CARs are synthetic proteins with a modular design intended to engage the endogenous cell signaling cascades that elicit effector T cell functions – including enhanced proliferation, cytokine release, and cytotoxicity.

Current research is intensely focused on optimizing the design of chimeric antigen receptors to improve downstream signaling activation. In order to realize the remarkable power of adoptive cell therapy, identifying the right CAR-T target and gaining a complete understanding of its biology is essential. Several techniques, including immunohistochemistry (IHC), can be utilized to confirm the characteristics and spatial context of T cell populations and their target antigen before and during CAR-T based intervention. CAR-T cell therapies to date have shown promise in the treatment of a range of blood cancers, including diffuse large B-cell lymphoma and acute lymphoblastic leukemia. Efforts to improve CAR-T penetration and response in solid tumors are ongoing.

Are you studying a particular cancer target or CAR design? See some in action in our CAR signaling pathway and learn more about pivotal cancer immunology targets.