What Is Multiple Myeloma?

Multiple myeloma is a cancer of plasma cells that is treatable, but not curable. In this blog, we review recent advancements including next-generation proteasome inhibitors, monoclonal bispecific antibodies, antibody-drug conjugates, and CAR-T therapies that have changed the therapeutic landscape for multiple myeloma.

So what exactly is multiple myeloma? It is a cancer of plasma cells normally found in the bone marrow that produce antibodies in response to an infection. Cancerous plasma cells grow uncontrollably, crowding out normal cells in the bone marrow that generate red blood cells, platelets, and normal white blood cells that fight infection. They also produce abnormal levels of monoclonal immunoglobulins that can impair kidney function, and can form tumors in the bone or soft tissues of the body.1-2

Multiple myeloma is relatively uncommon in the United States. It is the second most common hematologic malignancy but accounts for only ~1% of all cancer types. However, prognosis remains poor for multiple myeloma patients as is not considered a curable cancer. Patients can require numerous lines of therapy to manage the disease and often develop resistance or relapse; therefore, developing new treatment approaches that can be used as stand-alone treatments or in combination with other therapies is imperative.

Resisting cell death is a hallmark of cancer cells. Whether a cell survives or undergoes cell death depends, in part, on the delicate balance of pro-apoptotic and anti-apoptotic protein activation in the Bcl-2 family. Expression of Mcl-1, an anti-apoptotic member of the Bcl-2 family, is increased in many newly diagnosed cases of multiple myeloma and often further increased at relapse. High levels of Bcl-2 and Bcl-xL have also been observed, suggesting a complicated interplay between the proteins that ultimately results in the ability to evade apoptosis.3

As a result, several Bcl-2 family inhibitors have shown promise as both a single treatment option or a treatment that can be used in combination with other multiple myeloma therapies, including proteasome inhibitors, immunomodulators like pomalidomide or lenalidomide, dexamethasone, chemotherapy, and radiation therapy.4

Proteasome inhibitors (PIs) like bortezomib, which reversibly inhibits the chymotrypsin-like activity of the 20S proteasome, have been a staple when treating multiple myeloma for the past 20 years. The ubiquitin-proteasome system tags misfolded proteins with ubiquitin chains, earmarking them for protein degradation. Inhibiting the proteasome results in an accumulation of misfolded or unfolded monoclonal immunoglobulins produced by the multiple myeloma cells in the endoplasmic reticulum (ER), stressing the ER to trigger an apoptotic response. Inhibiting the proteasome also leads to an increase in the levels of IkB, which in turn inhibits the anti-apoptotic NF-kB protein. Bortezomib has helped increase the mean overall survival of multiple myeloma patients; however, one significant side effect in treatment regimens is the induction of peripheral neuropathy. Additionally, patients often develop resistance over time. Thus, new classes of PIs that target different components of the ubiquitin-proteasome system with distinct pharmacokinetic and pharmacodynamic characteristics are currently in development. One approach is to target upstream components of the ubiquitin-proteasome system that are dysregulated to minimize side effects.5

Monoclonal antibodies and antibody-drug conjugates (ADCs) against targets like CD38, TNFRSF17/BCMA and CRACC/SLAMF7/CD319 represent additional classes of therapies that can be used to treat relapsed and refractory multiple myeloma. For example, belantamb-mafodotin, an ADC targeting TNFRSF17/BCMA, was approved by the FDA in 2020 for the treatment of relapsed and refractory multiple myeloma. Early studies also demonstrate the promise of bispecific monoclonal antibodies, specifically bispecific T cell engagers (BiTEs), that can target multiple proteins, like CD3 on T cells and TNFRSF17/BCMA on plasma cells at the same time.4

Since multiple myeloma affects plasma cells found in the bone marrow, another way to manage the disease is to perform a stem cell transplant, where patients get high-dose chemotherapy to kill all the cells in the bone marrow. Patients then receive healthy stem cells that are either collected from the patient themselves or a donor. Potential side effects include susceptibility to infection, bleeding due to low blood counts, and graft-vs-host disease when the stem cells are obtained from a donor. However, stem cell transplants are not considered for the majority of multiple myeloma patients due to age, and is still challenged by eventual relapse.6

Finally, CAR-T therapies have opened exciting, new possibilities when it comes to cancer treatment as a whole, especially with their ability to confer durable remission against resistant or relapsed cancers. Using CAR-T therapies to treat multiple myeloma patients is of particular interest because of the success of anti-CD19 CAR-T therapy at achieving long-term remission against B-cell malignancies. Selecting an effective target antigen that won’t trigger on-target, off-tumor toxicity is of utmost importance during CAR-T development. Promising targets for multiple myeloma include TNFRSF17/BCMA, CRACC/SLAMF7/CD319, GPRC5D, and CD38. However, antigen escape remains a concern; thus, continuing to expand available CAR-T approaches, such as developing bispecific CAR-T cells, is critical.7-8 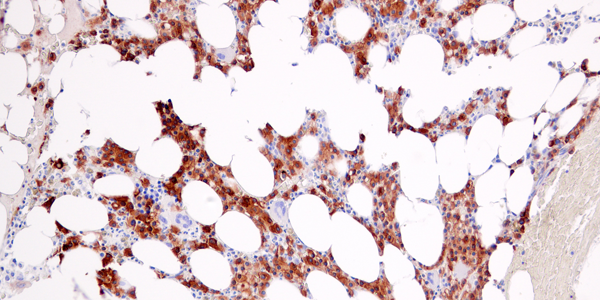