Fibrosis is a disease that is characterized by scarring and hardening of tissues and organs. Fibrosis can affect all tissues of the body, and left unchecked, can result in organ failure and death. What causes it? Believe it or not, it is a process that stems from wound healing that has gone awry.

In response to epithelial cell damage, release of transforming growth factor-beta (TGF-β) and other factors orchestrate a program of local inflammation and the activation of myofibroblasts, cells that are critical for wound repair. Upon activation, these cells engage in wound healing by laying down collagens and fibronectin that remodel the extracellular environment (ECM) to restore tissue integrity and promote replacement of parenchymal cells. In the context of wound healing, this process ends with the apoptosis of the myofibroblasts and abatement of inflammation. 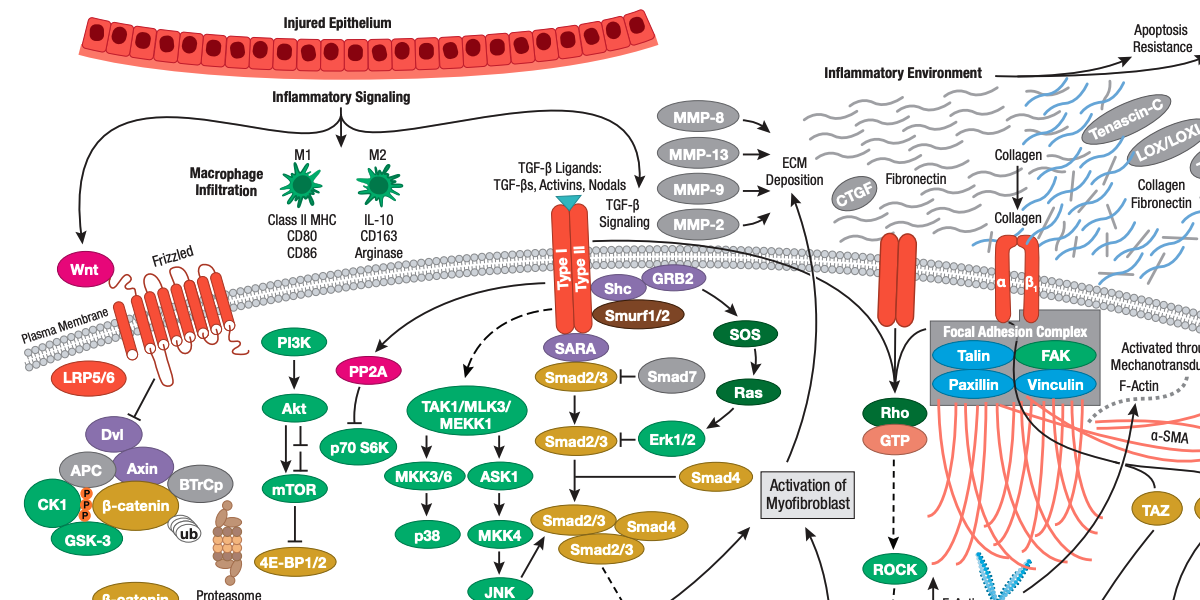 However, when tissues are subjected to persistent insult and injury, say in the form of toxins, infectious pathogens, autoimmune reactions, etc., this wound repair process goes awry. Chronic injury leads to uncontrolled myofibroblast activation and thus to pathologically excessive deposition of ECM. This creates a chronic inflammatory environment with macrophage and immune cell infiltration. In this cellular milieu, cytokines and growth factors are abundantly released, including TGF-β family members and other signaling molecules that act as the principal effectors of the fibrotic process.

Cancer-associated fibrosis is a crucial aspect of the tumor microenvironment (TME), which greatly impacts cancer behavior. However, there is some question whether fibrosis predominantly promotes or suppresses tumor growth. Cells like fibroblasts and mesenchymal stem cells (MSCs), which are critical to the generation of tissue fibrosis, have two phenotypes depending on their independence or association with cancer cells. Cancer-associated fibroblasts and cancer-associated MSCs have unique molecular profiles that facilitate cancer cell cross talk, influence extracellular matrix deposition, and direct the immune system to generate a pro-tumorigenic environment. Conversely, normal tissue fibroblasts and MSCs are important in restricting cancer initiation, influencing epithelial cell differentiation, and limiting cancer cell invasion.

Fibrosis of the liver has recently become an intense area of research for the pharmaceutical industry. The type of liver disease most researched is NASH, Non-Alcoholic Steato-Hepatistis, named because it is a liver disease that is not caused by excessive alcohol intake.

The precursor to NASH is called NAFLD – Non-Alcoholic Fatty liver Disease. People with NAFLD have an excess of lipids in their liver brought upon by risk factors, or perhaps even causative factors such as obesity, high cholesterol, high triglycerides, and metabolic syndrome. In fact, it is now suggested by some that NALFD is a previously unrecognized aspect of the metabolic syndrome itself. NALFD can become worse over time and eventually lead to NASH where the inflammation is occurring in the liver due to the toxic effects of abnormal lipid accumulation, and hepatocytes are beginning to undergo apoptosis. The myofibroblasts of the liver, the HSCs (Hepatic Stellate Cells) become activated and fill the liver with ECM components, including collagens and fibronectin.  If this process continues, the liver becomes filled with scar tissue without any functional parenchymal cells left. At this point the liver is cirrhotic and a perfect environment for the development of hepatocellular carcinoma. Liver transplant is all that is available to patients at this stage.

With the prevalence of the western diet, and all the problems associated with it, it is now estimated that between 25-35% of the population of the US have NALFD. About 20% of those people with NAFLD will go on to develop NASH. However, one of the problems with diagnosis of that 20% is that NALFD is symptomless, and only usually picked up on routine blood work liver panels. The complexity of the liver will surely necessitate a combinatorial treatment targeting varied aspects of this disease. With such a large number of people already with NALFD and NASH, and no approved drugs on the market that have yet to be proven to reverse these conditions, or halt their progress, it makes for one helluva race to the clinic for pharma to develop new therapies.