Cell Process: What signaling pathways are associated with cellular senescence?

Cell Process: What signaling pathways are associated with cellular senescence?

Senescence is the irreversible arrest of proliferation in response to a variety of cellular stressors. This state is associated with changes in intracellular signaling pathways, as well that the secretion of proteins that affect the surrounding tissue microenvironment. Most notably, senescent cells exhibit a persistent DNA damage response, the activation of proteins which control cell cycle arrest, and the senescence associated secretory phenotype. Senescent cells are also resistant to apoptosis and demonstrate altered metabolic activity. Determining why changes in cellular signaling lead to senescence is key to understanding how senescence contributes to normal and pathological processes affecting human health. 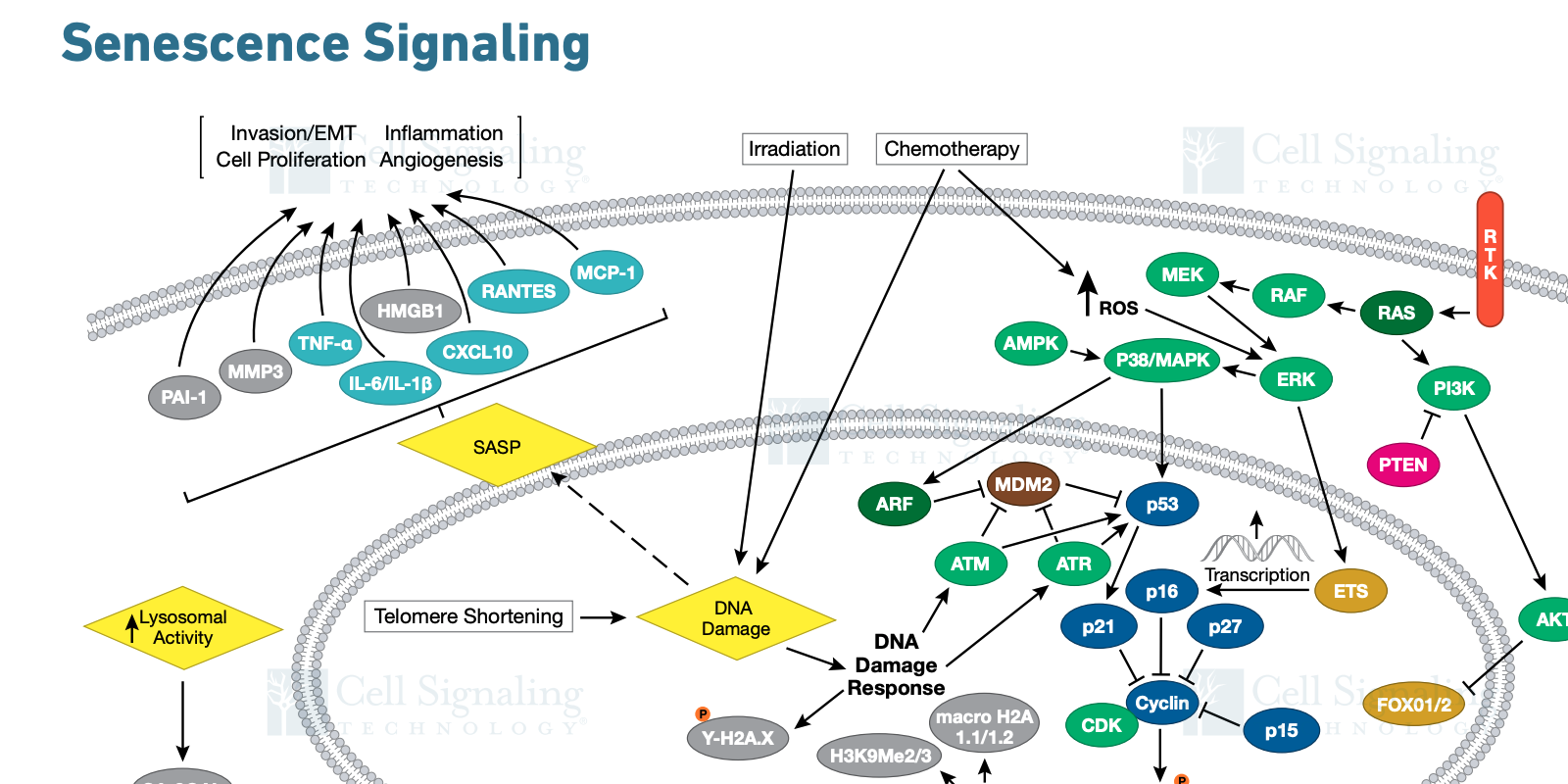 Ionizing radiation, telomere shortening, and chemotherapeutics are potent inducers of cellular senescence via their ability to inflict structural damage to DNA. Cells activate two primary defense mechanisms in response to this insult – (1) cell cycle exit and (2) mobilization of the cellular machinery to initiate DNA damage repair (DDR) processes. DDR components including the serine/threonine kinases ATM and ATR as well as the p53 tumor suppressor protein converge on the activation of cyclin dependent kinase inhibitors (CDKIs)—p16, p21, and p27—and lead to hyperphosphorlyation of the retinoblastoma protein (RB) and ultimately, withdrawal from the cell cycle. In parallel, additional DDR components like the p53 binding protein 53BP1, translocate to the nucleus where they promote the repair of double stranded DNA breaks. This recruitment of DDR proteins to sites of DNA damage is signaled in part by the phosphorylation of the histone H2A.X protein at Ser139 by the ATM and ATR kinases. To investigate these changes, the Senescence Marker Antibody Sampler Kit provides a collection of reagents to commonly used biomarkers of senescence.

Intracellular signaling activated by DNA damage and cell cycle arrest indirectly stimulates the secretion of a wide array of proteins by senescent cells. This is commonly referred to as the senescence-associated secretory phenotype (SASP) and includes the release of many pro-inflammatory cytokines (e.g. IL-6/IL-1β), proteases (MMP3), and growth factors such as EGF and VEGF which exert a range of autocrine/paracrine effects on the surrounding tissue microenvironment. SASP can act to recruit immune cells to initiate tissue repair through the removal of damaged cells, but has also been linked to angiogenesis and ECM remodeling to promote tumor cell progression. These beneficial or detrimental effects are largely dependent on cellular context. The SASP antibody sampler kit provides an economical way of detecting multiple SASP components in your experimental system.

Another feature of senescent cell signaling is the activation of pro-survival pathways. These typically lead to the upregulation of the anti-apoptotic proteins Bcl-2 and Bcl-xL which provide senescent cells with resistance to cellular death. Alterations in p53 signaling contribute to this phenotype. Although the precise reason senescent cells exhibit resistance to apoptosis is unknown, one advantage may be their ability to remain viable to shape tissue repair through SASP.

Metabolic reprogramming during senescence is impacted by changes in growth factor signaling pathways. These include the activation of AMP-activated kinase (AMPK)  signaling to reinforce cell cycle arrest, and a dysregulation of mechanistic target of rapamycin (mTOR) signaling. These pathways lead to alterations in protein expression and translation and influence mitochondrial and lysosomal function.

How does cellular senescence impact your experimental model? For more information please visit the CST resource pages on Senescence Signaling.