In this blog, we are delving into some of the advantages and disadvantages of polyclonal and monoclonal antibodies, as well as explaining the main differences between mouse and rabbit antibodies used for research. As in Antibody Essentials Part 3, we want you to continue thinking about antibodies as though you were producing them yourself because having the right mindset is key to producing immunoassay results you can trust.

Antibody Clonality: What’s in a Word?

Previously we’ve discussed classifying antibodies, and we noted that one way of doing this is to categorize them as either polyclonal or monoclonal. But as you are likely aware, the term “cloning” is quite flexible – it can be used to refer to copying and editing genetic sequences, to manipulating and expanding the cells carrying those genes, or even to cloning entire organisms – so what does it mean here? To put cloning into an antibody context, let’s recall our earlier discussion of antibody diversity, where activated B-cells proliferate to amplify the immune response and increase antibody production. If we consider an imaginary scenario where an animal is immunized with a viral protein that has ten epitopes, which activate ten different B-cells, we know that each of those B-cells expresses a unique antibody at its surface as a result of VDJ recombination. Proliferation of the B-cells in response to the foreign protein will therefore lead to ten distinct B-cell populations, where all the B-cells within each population are clonally related. All of the cells within one clonal population are descended from the same ancestor B-cell, and are functionally identical in terms of expressing the same antibody. Now consider that, in the host, all ten of the B-cell populations, or clones, exist together, proliferating and producing antibodies in the blood plasma. If we collect the blood and purify the antibodies from the sera, we’ll have a mixture of ten different antibodies produced from ten different B-cell clones, hence the term polyclonal. 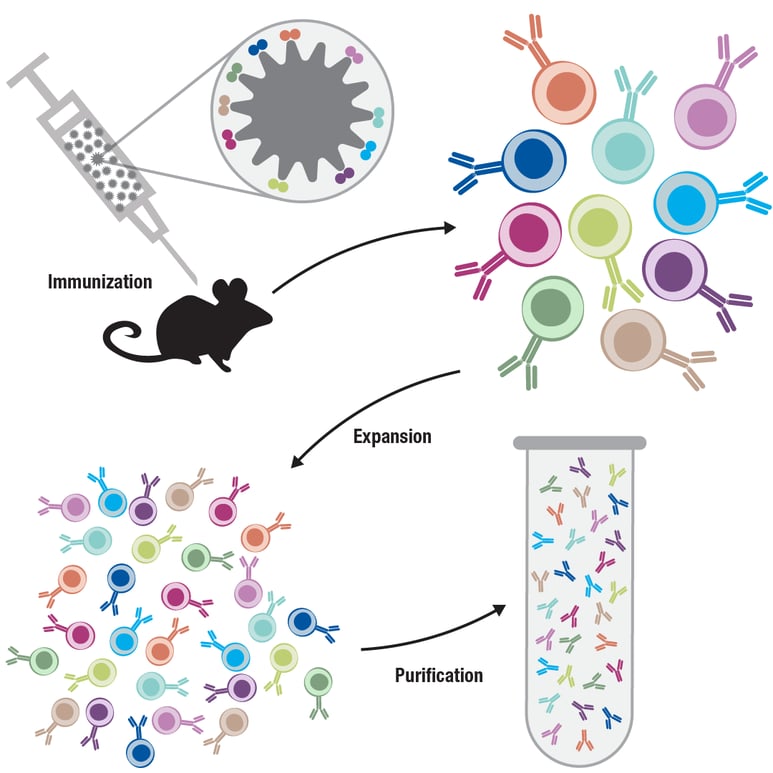 Now imagine that, instead of collecting the pooled sera, we isolate all of the immune cells from the animal and prepare them for cell culture in a multiwell plate. By diluting the mixture of cells so that each well receives either no cells or one cell, we can produce a single clone of identical proliferating cells in each well, although this should of course be verified by subsequent testing. So, a well that was seeded with one of the ten B cells will now have a pure population of clonally related B cells, expressing the same antibody. However, since B cells do not continue dividing indefinitely, only a finite quantity of antibody can be produced.

To overcome this shortcoming, Kohler and Milstein developed hybridoma technology in 1975, as we noted in the previous blog on antibody history. Splenocytes (spleen cell populations that include B cells) are fused with immortal myeloma tumor cells, resulting in the formation of immortalized hybridoma cells. Each hybridoma cell expresses the same antibody as its B cell ancestor. A selection step using specialized culture media, in which only fused cells will grow, is followed by cloning by limited dilution to establish monoclonal lines. Subsequent expansion, testing/characterization, and long-term storage of the hybridoma cell line assures a long-lived source of the monoclonal antibody. After the 1970s, alternative recombinant methods have been developed for generating monoclonal antibodies that do not rely on immortalization. 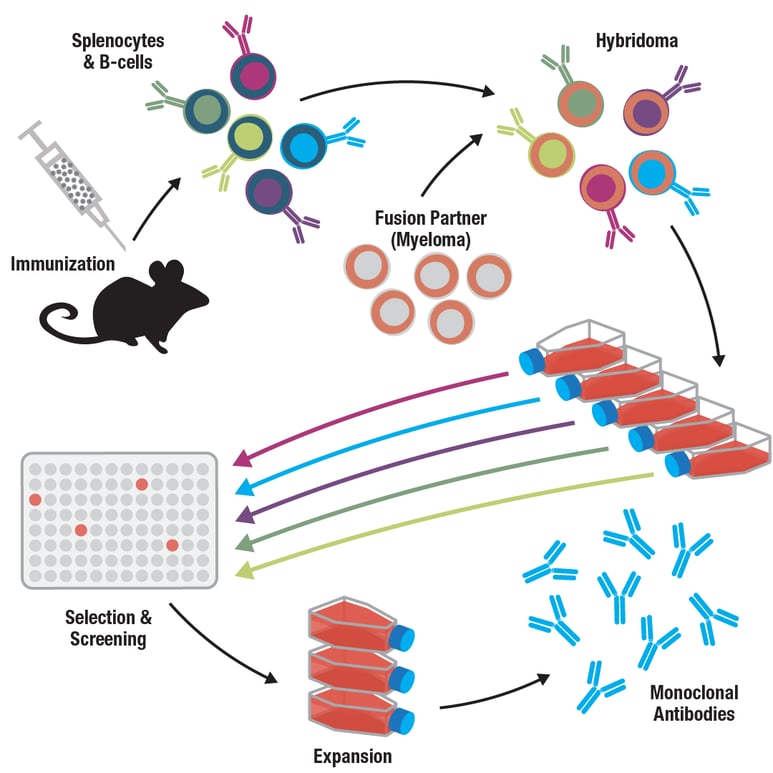 Figure 2. The generation of monoclonal antibodies includes steps for isolation, selection, and expansion of single hybridoma clones, yielding a preparation composed of only one antibody.

In recent years, the use of both polyclonal and monoclonal antibodies has increased significantly. Each type of antibody has its own advantages and disadvantages, many of which may be weighted differently by the antibody developer and the end-user. You'll recall that in past decades, academic researchers would often develop and validate antibodies themselves before using them in their studies, but today the roles of developer and user are most often separated. We will explore the advantages and disadvantages of polyclonal and monoclonal antibodies for research, from the perspective of both roles.

The Pros and Cons of Polyclonal Antibodies

First let’s explore the advantages of polyclonals, since there’s a noticeable overlap between how these benefits are viewed by the developer and the user. Because polyclonals are quick and inexpensive to produce, they can be brought to market faster and scientists can obtain them and start using them in experiments sooner. This can be especially pertinent when there is increasing interest in a "hot" target, which could be a novel or previously under-studied protein that is hypothesized to play an important biological role; generally, polyclonal antibodies to a hot target will become available prior to monoclonals. While polyclonals are often produced in rabbit hosts, they can also be generated in larger volumes from species such as goats, sheep, and donkeys, providing manufacturers with more material and researchers with antibody quantities suitable to support a large-scale screen. 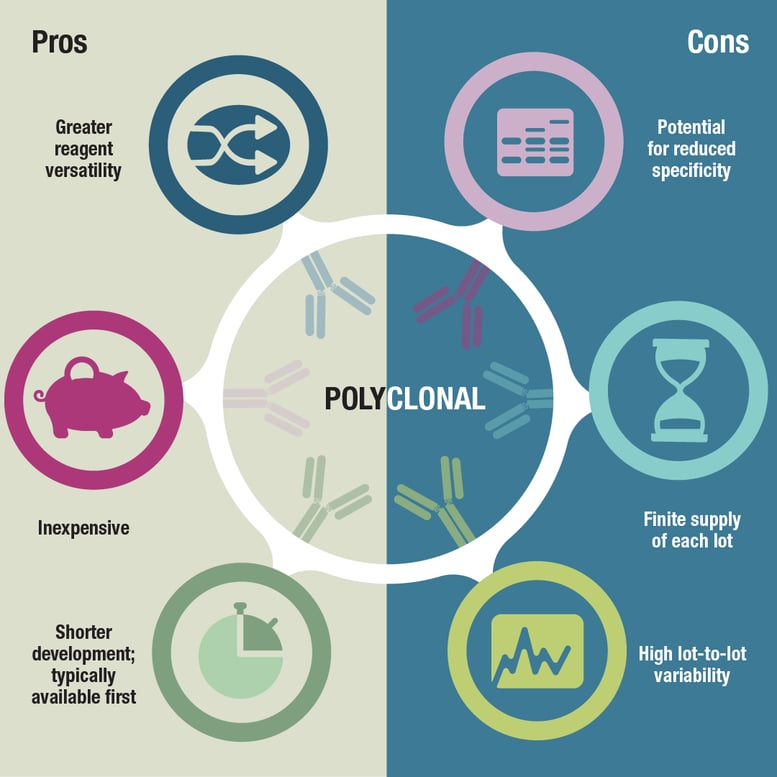 As a counterbalance to these benefits, a major disadvantage of polyclonals is that their supply is limited by the lifetime of the animal host. Polyclonals also demonstrate considerable lot-to-lot variability since different lots might be collected from the same animal over time, or collected from different animals, either of which could result in differences in the composition of polyclonal lots. This means that antibody manufacturers are required to continually produce and validate new antibody lots, as well as develop appropriate replacement products. Consequently, researchers may need to re-optimize experimental conditions from one antibody lot to the next, or even reconfigure assay cascades should a product become obsolete. Another disadvantage of polyclonals is their potential for reduced specificity compared to monoclonals. A polyclonal preparation consists of multiple antibodies, each recognizing a different epitope, and it has a greater risk of demonstrating non-specific reactivity.

The Pros and Cons of Monoclonal Antibodies

Now let’s turn our attention to monoclonal antibodies. A main advantage of monoclonals is their specificity, which is due to their innate recognition of only one epitope. Monoclonal antibody optimization is achieved by screening and selecting the best clones during the process of antibody development. Producing highly specific monoclonal antibodies can give antibody developers a competitive edge over other products on the market, while supplying researchers with the benefits of improved target identification and less background signal, compared to polyclonals, in their immunoassays. Some labs have experiments or controls that they may run for months, a year, or even many years over the course of publishing a paper or a series of papers. Since researchers want to compare data across different experiments and different studies, and will also want other labs to replicate and strengthen their own findings, it's important to know the specificity and performance of reagents won't significantly change. Overall, monoclonals are renowned for their consistent performance, guaranteed long-term production, and relatively simple scale-up, providing manufacturers with a constant supply and researchers with experimental reliability whatever the timelines of their project. Despite their many advantages, a drawback of monoclonal antibodies is that they are more time-consuming and expensive to produce than polyclonals. If a monoclonal has not yet been developed, researchers may consider using an existing polyclonal antibody and then switching to a monoclonal if one becomes available. 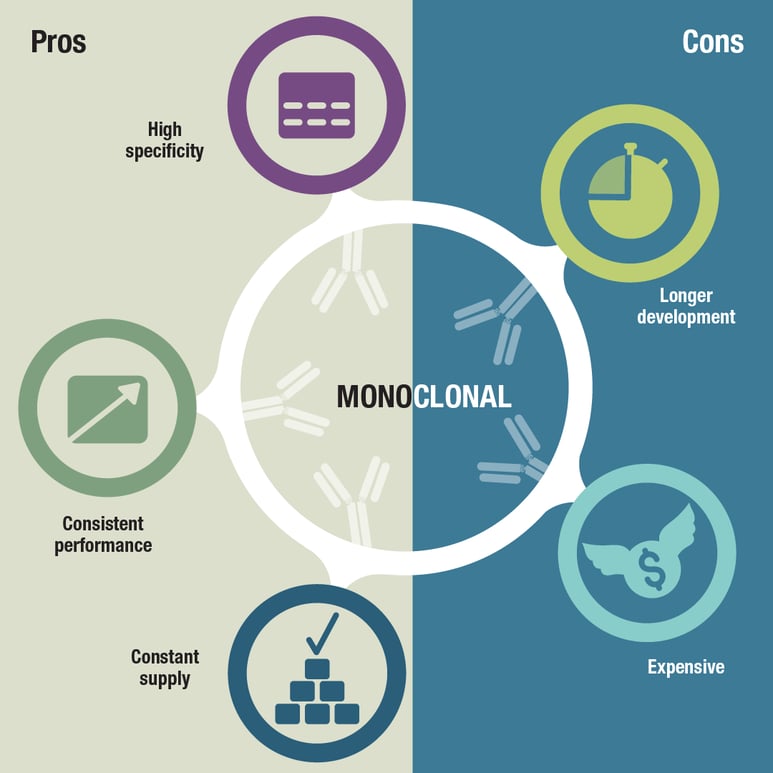 Ultimately, your decision to pursue polyclonal or monoclonal antibodies will require an assessment of your own research aims, with consideration given to the needs of your particular assays, as well as the cost and availability of antibodies that will be capable of meeting your experimental goals.

Pros and Cons: Rabbit vs Mouse as Host Species

Rabbit and mouse antibodies are among the most widely used primary antibody reagents for research. In the past, it was more common to utilize a mouse host for a monoclonal antibody. This was due to the lack of a suitable hybridoma fusion partner for rabbit B cells, until 1995, when Katherine Knight and colleagues developed a transgenic rabbit to create a plasmacytoma cell line. As a result, rabbit monoclonals are more widely available today. An advantage of using rabbits for antibody production is that they have a more diverse immune repertoire than mice, meaning they are able to generate immune responses against a wider range of antigens, including small peptides and biomolecules. Rabbit antibodies also typically have a higher affinity for their target. From an antibody developer’s perspective, greater diversity and affinity translates to producing a broader range of highly selective antibodies, whereas from a researcher’s point of view it means a larger pool of antibody reagents to choose from. 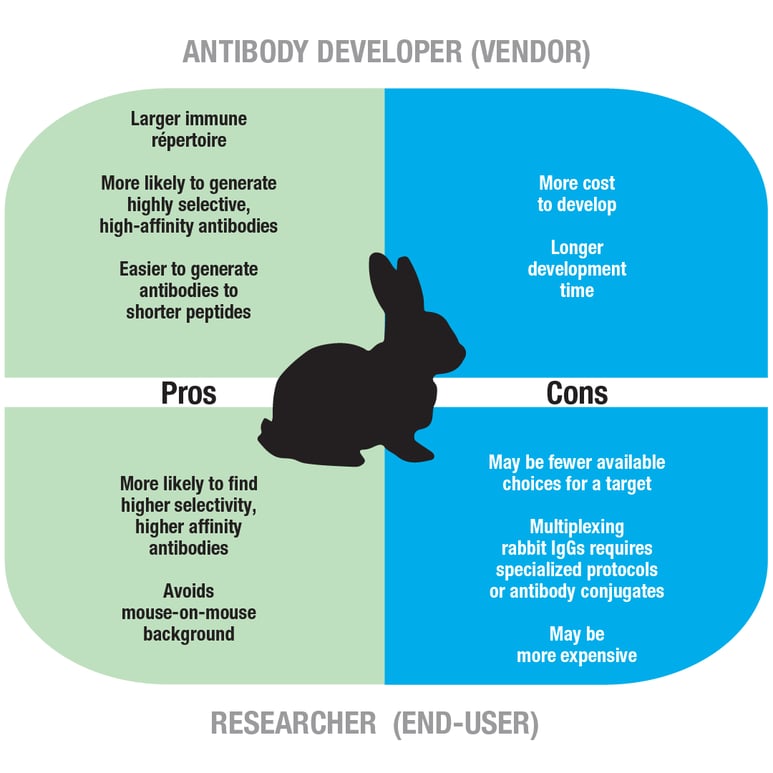 Figure 5. Pros and cons of rabbit as a host species.

Despite greater diversity and affinity, a disadvantage specific to rabbit monoclonal antibody production is that the technology is, again, quite time-consuming and costly for the producer, which translates to rabbit monoclonals often being more expensive for the consumer than alternatives raised in mouse hosts. Researchers who plan to combine multiple Rabbit IgG's in the same assay will need to consider a more complex and potentially difficult multiplexing protocol, such as a serial antibody labeling and stripping strategy for multiplex IHC. Alternatively, multiple rabbit antibody conjugates with distinct fluorophore labels could be used to enable direct detection without the need for secondary antibodies in a multiplex assay, but the availability of directly coupled antibody-fluorophore combinations may be a constraining factor.

Figure 6. Pros and cons of mouse as a host species.

Since mouse monoclonal antibody technology has been around for much longer than the rabbit equivalent, you may often find more clones available for your target from mice hosts than rabbit hosts. Another advantage for the developer is the ability to engineer subclass switching with mouse antibodies (e.g. IgG1, IgG2a), while rabbits only have one class. For the antibody user, multiplexing with mouse antibodies from different classes, or subclasses, is relatively straightforward. From an antibody developer’s standpoint, mouse husbandry is easier than rabbit husbandry; furthermore, the genetic approaches to engineering antibodies through recombinant technologies are more established for mice than rabbits, meaning mice are often a preferred choice for antibody production.

For the antibody producer, a limitation of using mice to produce antibodies is that they offer reduced antibody diversity in comparison to rabbits and may not always generate an adequate immune response to small peptide antigens and molecules. For the researcher, a potential issue is mouse-on-mouse cross-reactivity, which is where anti-mouse secondary antibodies bind to endogenous immunoglobulins in murine sample material, generating unwanted background signal. This problem is common in IHC experiments where mouse strains are routinely used for disease models; while it can be eliminated by including a mouse-on-mouse blocking step, doing this extends immunostaining protocols.

Now that we’ve discussed the advantages and disadvantages of polyclonal and monoclonal antibodies, and antibodies from rabbit and mouse hosts, we hope you have a clearer idea of how these essential reagents can fit into your research plans, and why you may not always be able to source your preferred antibody for your target. Regardless of whether your antibody was generated in mouse, rabbit, or another species, it still needs to be validated for the application and input material type in your experiment for you to have confidence in your data. We’ll build on this further by considering what types of questions you should be asking when choosing antibodies for your research.

Next up, Important Considerations for Antibody Selection