Immunology: What are toll-like receptors and how do they invoke tumor tolerance?

Immunology: What are toll-like receptors and how do they invoke tumor tolerance?

Toll-like receptors (TLR) are transmembrane receptors that play a critical role in innate immune responses. The name derives from the homology to the Drosophila Toll gene; unlike adaptive immunity which evolved in the vertebrate lineage, innate immunity exists (and is conserved) in invertebrate branches. 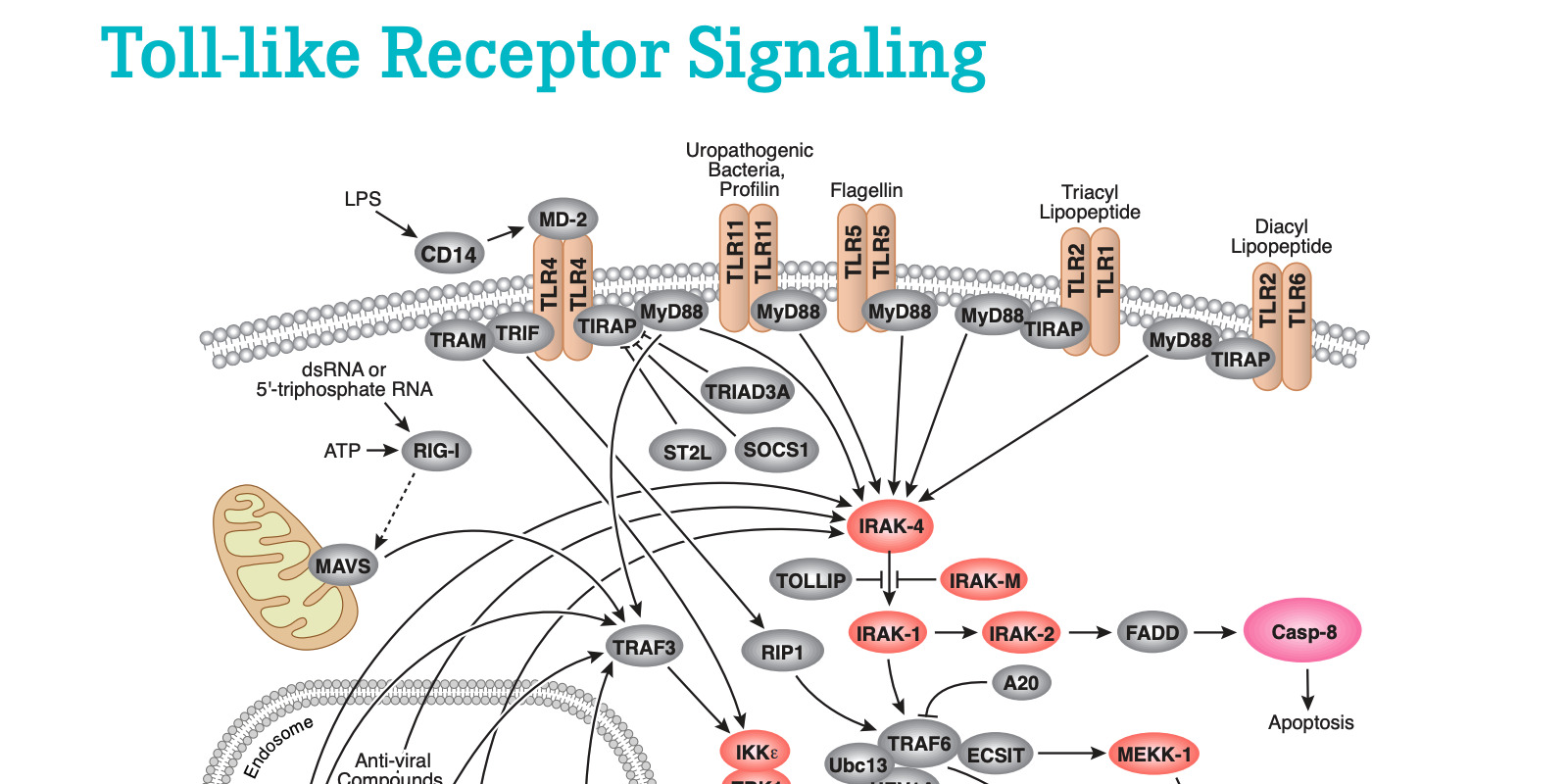 Highly expressed by dendritic cells and macrophages, these receptors sense and respond to pathogen-associated molecular patterns (PAMPs) - often found on the surface of bacteria - and orchestrate first-line defense inflammatory responses via the subsequent activation of intracellular signaling pathways. Understanding how TLR signaling is activated by molecular patterns is relevant not only to their role in combating infection, but also to their role in cancer, since activation of TLRs by damage-associated molecular patterns (DAMPs) - biomolecules in host cells that can trigger a cascade - has been shown to promote tumor growth and build tumor tolerance to host immune responses.

TLRs are a large superfamily of single-pass transmembrane receptors expressed throughout various tissues and by a number of different cell types. For example, in addition to their expression by immune cells, TLRs are found in many epithelial tissues that serve as a protective layer against infection. Accordingly, this positioning enables a rapid response to microbes attempting to cross the epithelium. To date, eleven family members have been identified based on the presence of a common Toll-IL-1 receptor (TIR) domain. TLRs can be further classified by their cellular localization, as family members TLR1, TLR2, TLR4, TLR5, TLR6, and TLR11 are found at the cell surface, while TLR3, TLR7, TLR8, and TLR9 are localized to the endosomal/lysosomal compartment. Unlike antibodies, whose diversity for antigen recognition is established by complex somatic recombination, TLRs detect pathogens via germline-encoded pattern recognition receptors. These receptors recognize features common to many microorganisms, including cell surface and cell wall components, that are distinguishable from molecules normally present in host tissues. Examples of common PAMPs include lipopolysaccharide (LPS), flagellin, and peptidoglycan (PGN). Bacterial DNA containing unmethylated CpG motifs can also induce an innate immune response via TLR activation, resulting in very rapid immune response times that occur within minutes to hours.

Upon ligand binding to the extracellular domain of a TLR, signaling is initiated at the cytoplasmic TIR domain via the recruitment of the TIR domain-containing adaptor, MyD88. In turn, MyD88 recruits IL-1 receptor-associated kinase-4 (IRAK-4), which serves as a central hub for downstream signaling through the IKK complex and leads to activation of MAP kinases (i.e. JNK and p38 MAPK). Activation of MyD88-independent pathways can also occur via TRIF and TRAF3, leading to recruitment of IKKε/TBK1. Ultimately, signaling via these pathways converges on transcription factors, including IRF7, IRF3, AP-1, and NF-kB, and results in the upregulation of gene expression associated with the survival and proliferation of immune cells engaged in the immune response, cytokine production, and phagocytosis.

Recently, TLR expression has been reported in a variety of cancers, including those from brain, liver, prostate, and ovarian tumors. Evidence suggests that the presence of DAMPs by cancer cells stimulates TLR activation on immune cells in the tumor microenviroment, which contributes to chronic inflammation. These changes have been associated with alterations in tumor progression, the inhibition of apoptosis, and tumor resistance to immune response. Accordingly, TLR agonists have shown promising therapeutic benefits as anti-cancer agents, capable of stemming tumor growth and progression.

See all of the players interact on our Toll-like receptor signaling pathway.