Cell Process: Which markers can be used to identify cellular senescence?

Cell Process: Which markers can be used to identify cellular senescence?

In response to a variety of environmental factors – like ionizing radiation, exposure to chemotherapeutic drugs, oxidative stress, DNA damage, mitochondrial dysfunction, or oncogene activation – cells may permanently cease proliferation and enter a state known as cellular senescence. Senescence occurs during normal developmental processes, in wound healing, and as a consequence of aging and age-related disease. Accordingly, understanding why senescence contributes to these processes may lead to the development of pro- and anti-senescence therapies to treat a range of diseases.

Senescent cells exhibit several characteristic features that distinguish them from other cells. These features – or markers of senescence – include a large flattened morphology, breakdown of the nuclear envelope, metabolic dysregulation of lysosomal and mitochondrial function, evidence of DNA damage, and the upregulation of genes that regulate cell cycle arrest. Additionally, senescent cells adopt a senescence-associated secretory phenotype (SASP) which is defined by the expression and release of a wide range of cytokines, growth factors, and proteases that act on the surrounding tissue microenvironment. 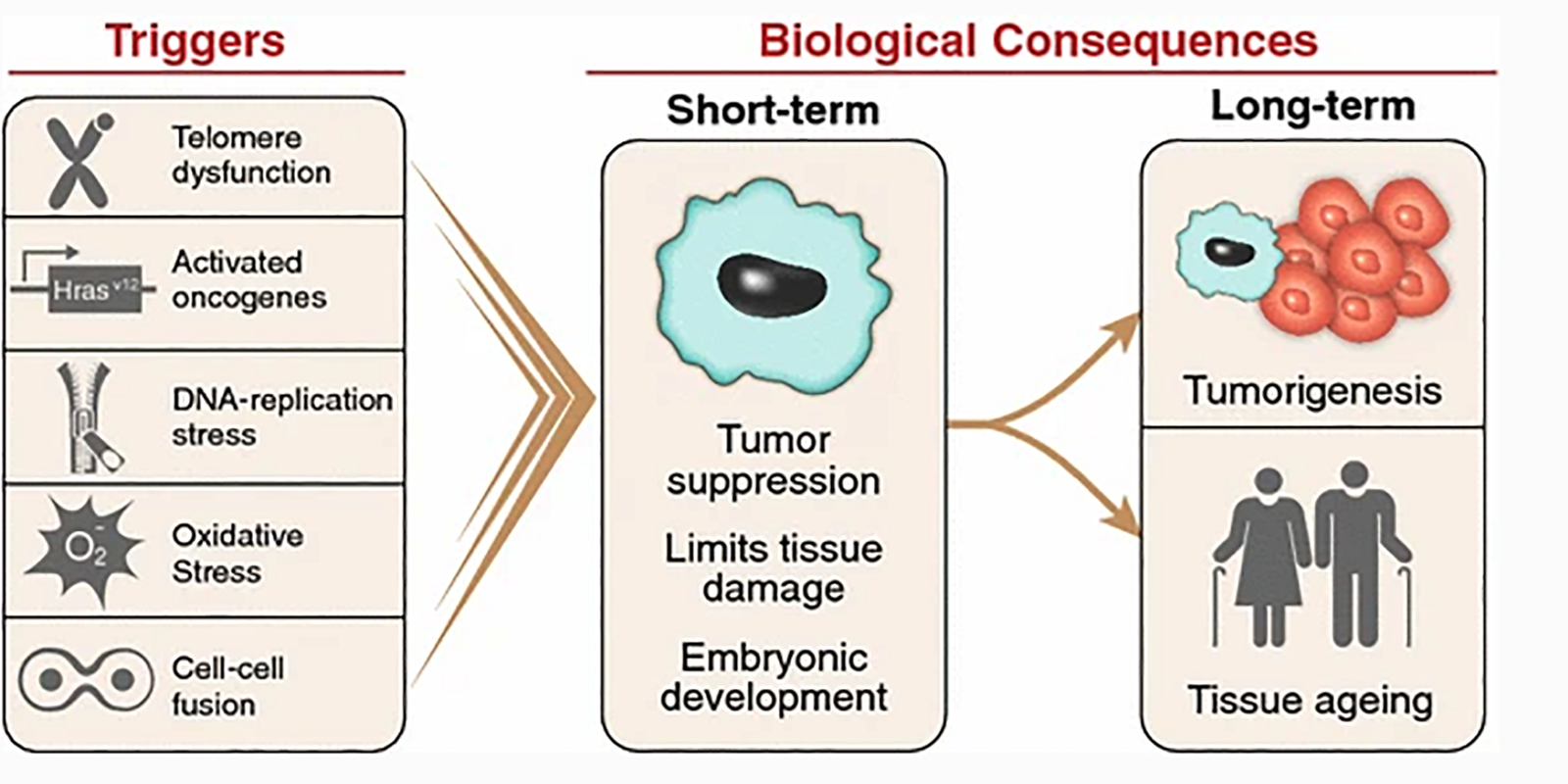 In addition to their large and flattened shape in vitro, senescent cells differ morphologically in that they typically display a breakdown of nuclear envelope integrity due to decreased expression of lamin B1. The presence of chromatin reorganization with the formation of multiple senescence-associated heterochromatin foci (SAHF) and persistent DNA damage can be used to identify senescent cells.   Markers of SAHF include MacroH2A, Heterochromatin protein 1 (HP1), and Lysine 9 di-or-tri-methylated histone H3 (H3K9Me2/3) immunoreactivity. Similarly, phosphorylation of histone g-H2A.X serves as a marker of early and persistent DNA damage in senescent cells.

Components of the DNA damage response (DDR) including the serine/threonine kinases ATM and ATR as well as the p53 tumor suppressor protein, are activated during - and can be used to identify -senescence. In turn, the DDR response converges on the activation of cyclin dependent kinase inhibitors (CDKIs)—p16, p21, and p27—and lead to hyperphosphorlyation of the retinoblastoma protein (RB) and ultimately, withdrawal from the cell cycle.  To investigate these changes, the Senescence Marker Antibody Sampler Kit provides a collection of reagents to commonly used biomarkers of senescence.

Secreted proteins associated with the senescence-associated secretory phenotype (SASP) can be used to confirm the presence of senescent cells in a variety of contexts. These include many pro-inflammatory cytokines (e.g. IL-6/IL-1β), proteases (MMP3), and growth factors such as EGF and VEGF. The SASP antibody sampler kit provides an economical way to detecting multiple SASP components in your experimental system.

While the use of these markers have been used to identify and study senescence, it is important to note that not all senescent cells express them uniformly. In addition, some biomarkers may be observed in other cellular processes including apoptosis. Therefore, it is essential to assay and analyze the presence of several biomarkers independently to identify populations of senescent cells.

For more information on markers of cellular senescence, its signaling pathways, and useful reagents to study this process in your research, please visit the CST resource pages on Senescence Signaling.