Cell Process: What role does senescence play in disease?

Cell Process: What role does senescence play in disease?

Cellular senescence occurs when cells cease proliferation and irreversibly exit the cell cycle. While this occurs as a normal process during development and tissue remodeling, senescence has also been linked to a general decline in tissue function during aging as well as a number of disease states. These include the progression of cancer, atherosclerosis, diabetes, and neurodegeneration. Accordingly, understanding why senescent cells impact these conditions and developing ways to target their removal may provide therapeutic value for the treatment of many human conditions. 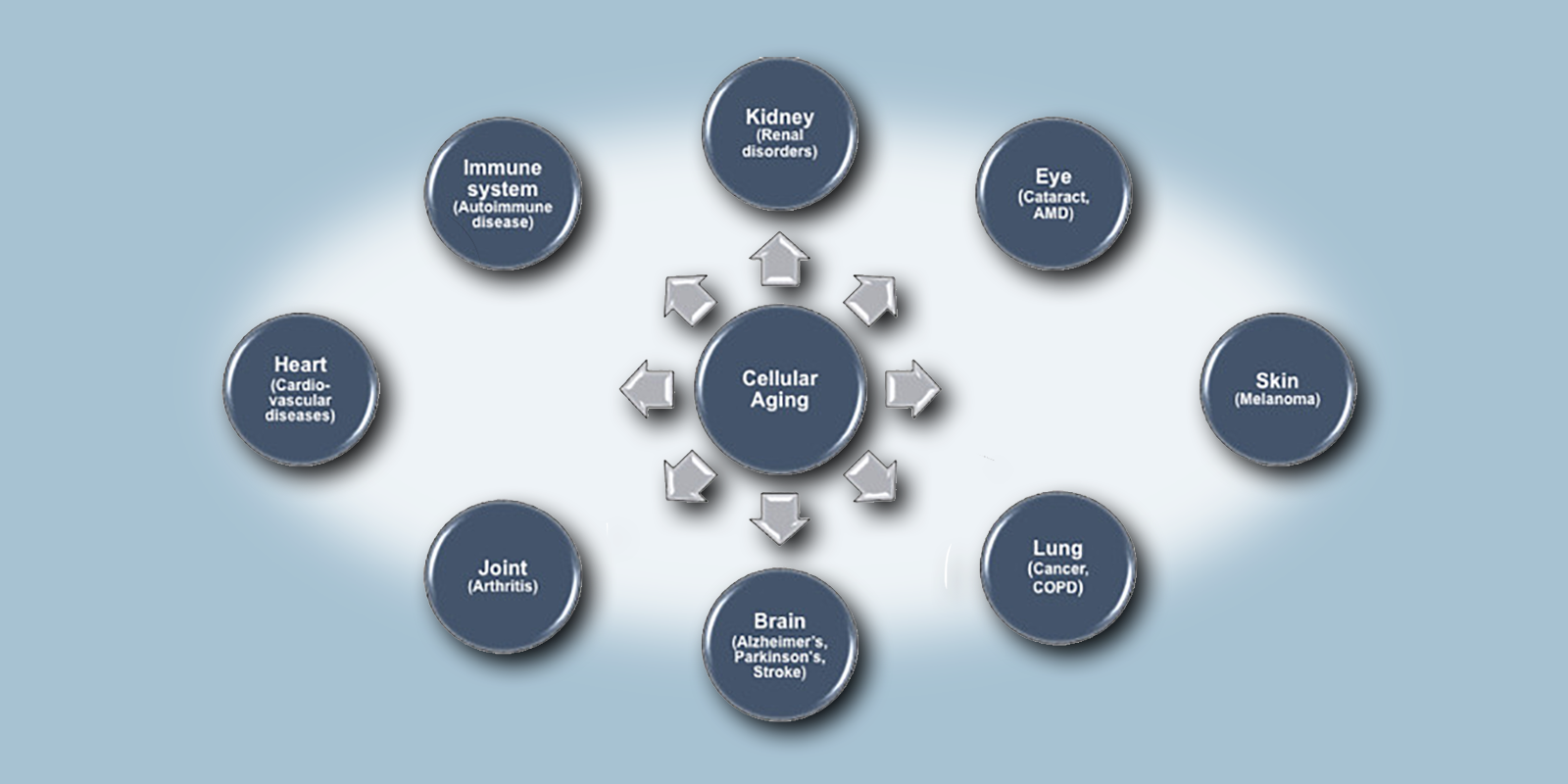 Senescence is triggered by DNA damage as a potential defense mechanism to prevent cells with harmful genetic mutations from dividing. Thus, cellular senescence serves an important anti-tumorigenic function. Many of the proteins that mediate senescence are known tumor suppressors, such as p53, p16INK4A, and retinoblastoma protein (Rb). Accordingly, mutations in these genes have been linked to several types of cancers. However, senescent cells can contribute to cancer progression through the upregulation and release of cytokines, proteases, and growth factors that alter the tumor microenvironment. This property of senescent cells is called the senescence-associated secretory phenotype (SASP). Secretion of these factors can promote angiogenesis, extracellular matrix remodeling, or epithelial-to-mesenchymal transition (EMT) leading to tumor progression and metastasis. In addition, inflammation associated with SASP can induce immunosuppression, which can further accelerate unchecked cancer cell growth.

In the nervous system, senescence contributes to several age-related neurodegenerative diseases, including Alzheimer’s disease (AD), Parkinson’s disease, and amyotrophic lateral sclerosis (ALS). Neuroinflammation mediated by SASP signaling and the inflammasome leads to the loss of neurons in these and other neurodegenerative diseases. In Alzheimer’s disease for example, there appears to be an increase in a particular type of glial cells called oligodendrocyte precursor cells that exhibit a senescent phenotype. Senolytic therapy—compounds that selectively trigger the cell death and removal of senescent cells— applied to mouse models of AD, significantly reduced neuroinflammation and amyloid plaque burden (Zhang P, 2019; PMID: 30936558).

Senescence of insulin-producing beta cells of the pancreas has been implicated in the progression of both type I and type II diabetes by influencing autoimmunity and metabolic function, respectively. In these conditions, senescence decreases the proliferative capacity of beta cells and the secretion of SASP components which compound ongoing inflammation and tissue damage. As was the case with Alzheimer’s disease, senolytic treatment in animal models of diabetes showed promising effects on stemming the course of the disease (Thompson PJ, 2019; PMID: 30799288) .

Interestingly, advanced age has been identified a common risk factor for the development of each of the previously mentioned conditions. Not surprisingly, it is well appreciated the senescent cells accumulate in most tissue during aging— a fact that further suggests a link between senescence and age-related disease.

Have you ever considered the link between senescence and the particular disease area that you study?

For more information on cellular senescence, its role in disease progression, and assays to study senescence in your research, please visit the CST Senescence Signaling pathway.