Cell Process: How is cellular senescence related to aging?

Cell Process: How is cellular senescence related to aging?

Senescence, the cessation of cell division and permanent withdrawal from the cell cycle, is a process that occurs throughout the lifespan — during embryogenesis, growth and development, tissue remodeling, and in wound healing. Senescent cells increase in number during aging and have been implicated in the decline of organismal function over time, as well as in the progression of age related diseases. These include metabolic and cardiovascular disorders, neurodegenerative disease, and cancer. In mammals, aging causes the gradual dysfunction of multiple tissue systems in a heterogeneous fashion, ultimately leading to death. Understanding how and why senescence contributes to the aging process may lead to therapies to slow or even reverse its progression. 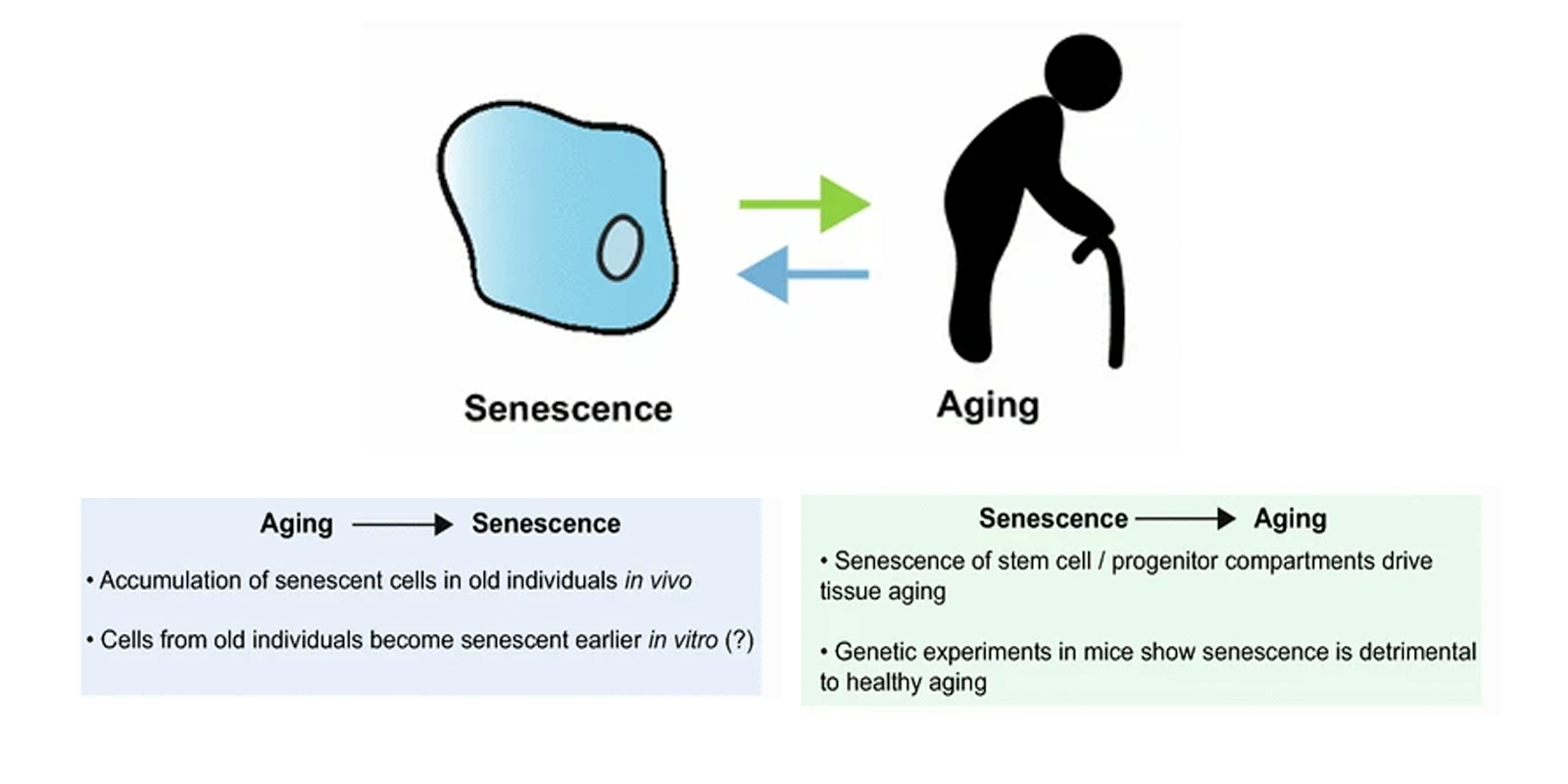 Senescence typically occurs in response to a variety of cellular stressors that lead to the accumulation of DNA damage. It also occurs in response to telomere shortening — a normal process that occurs with each round of cell division and serves as a mechanism to limit proliferation to a finite number of cell divisions. As such, senescence may have evolved as a way to prevent the propagation of cell harboring harmful genetic mutations. As a trade-off to this benefit, senescence and its associated changes in metabolic activity and cellular function participate in the aging process.

Evidence of a link between senescence and aging has been presented by seminal studies which show that actively targeting and removing senescent cells in animal models resulted in a marked extension of lifespan. In fact, the development and use of senolytics— a class of compounds that selectively induce the death of senescent cells— can increase lifespan and delay age-associated physical decline in rodents. Accordingly, the therapeutic benefit of senolytics is currently being investigated in clinical trials for the treatment of age-related diseases like osteoarthritis and chronic kidney disease. Senolytics also have clinical potential in treating cancer since a negative consequence of chemotherapies is an increase in the number of senescent cells, which is often associated with fatigue and other deleterious side effects. However, senescent cells secrete many proteins which can promote metastasis, a consequence of their senescence-associated secretory phenotype (SASP). Therefore, combining senolytics with chemotherapy to balance the positive and negative effects of senescent cells may be necessary to treat certain cancers.

Detecting senescent cells during aging can be performed with assays that exploit the morphological and metabolic changes associated with senescence. These include the large, flattened shape of senescent cells in vitro and the breakdown of the nuclear envelope caused by the decreased expression of Lamin B1. Evidence of DNA damage by the phosphorylation of histone H2A.X and the accumulation of senescence associated heterochromatin foci (SAHF) are common features of senescent cells. Additionally, altered expression levels are observed during senescence in key proteins that regulate cell cycle withdrawal, including the p53 tumor suppressor protein, the cyclin dependent kinase inhibitors (CDKIs) p16, p21, and p27, as well as within the SASP, including pro-inflammatory cytokines, proteases, and growth factors. The Senescence marker antibody sampler and SASP antibody sampler kits provide a collection of reagents to commonly used biomarkers of senescence.

For more information on cellular senescence, its signaling pathways, and assays to study senescence during aging in your research, please visit the CST resource pages on Senescence Signaling.