B Cell Basics:  What a disease researcher needs to know

B Cell Basics:  What a disease researcher needs to know

Changes in the activation of intracellular signaling networks downstream of B cell receptors (BCR) lead to altered B cell phenotypes. Knowledge of this process, and B cell plasticity, is essential for understanding how B cells modulate the immune response. 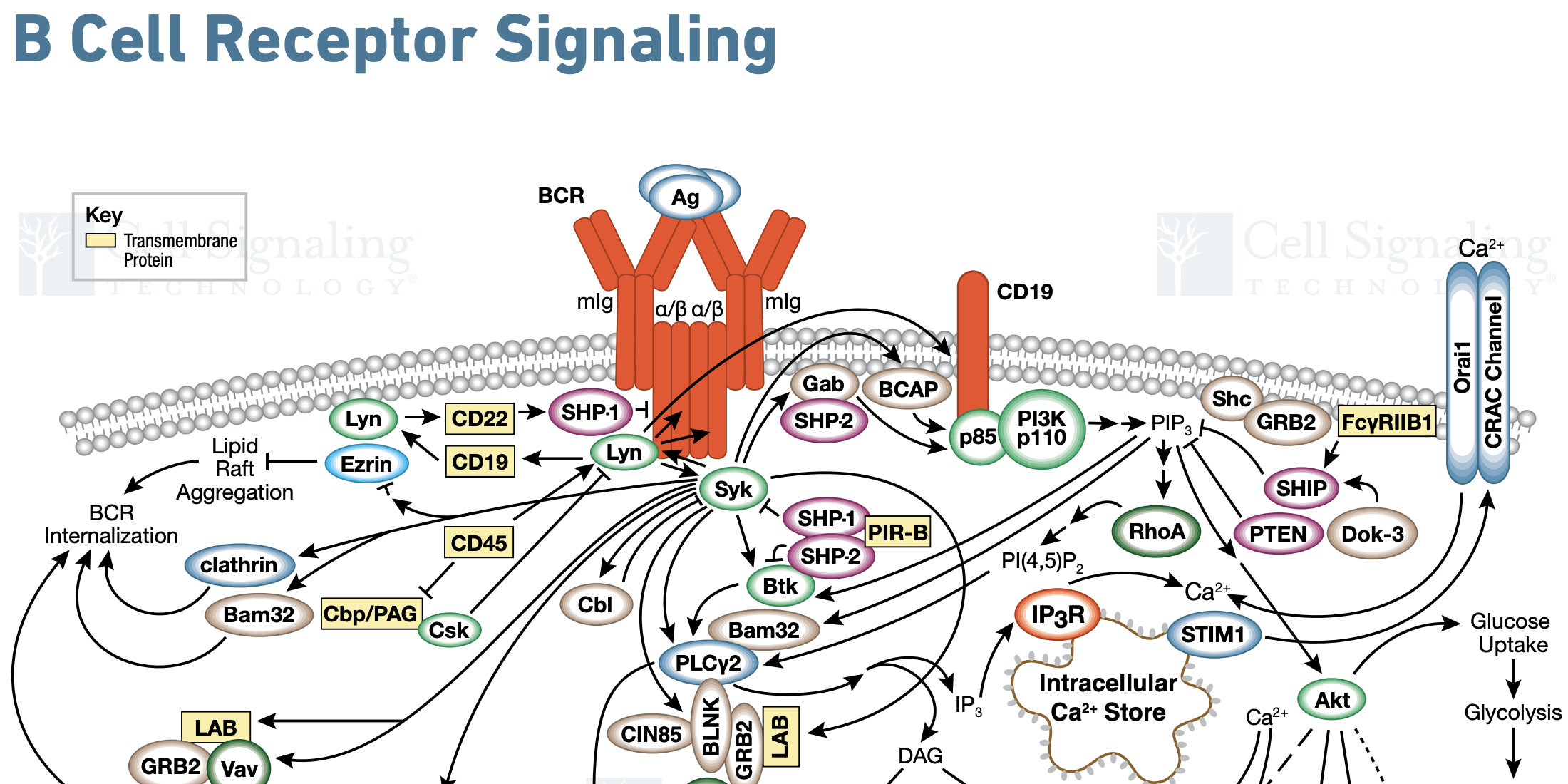 B cells are specialized lymphocytes that play a central role in the humoral component of the adaptive immune response. Naïve B cells are produced from hematopoietic stem cells in the bone marrow and exhibit plasticity as part of the adaptive response with several distinct possible outcomes— including the proliferation and differentiation into antibody-producing effector B cells called plasma cells, differentiation into memory B cells, anergy, or clonal deletion through apoptosis. These fates are controlled by the duration and strength of the activation of specific BCRs on the cell surface. BCRs recognize and facilitate the processing of antigens— a process that, with few exceptions, is dependent on help from T cells.

BCRs are immunoglobulin (Ig) chains expressed as cell surface receptors that are almost identical in structure to the antibodies released by plasma cells. They are produced through an elaborate process of gene rearrangement resulting in variable segments that encode the heavy and light Ig chains, which enable the specific recognition of single antigens. When an antigen is present, BCRs aggregate to form a ‘signalosome’— or group of signaling proteins— composed of the BCR, various intracellular tyrosine kinases— including members of the Src family as well as the Syk and Btk kinases—, and adaptor proteins. Together, these components initiate a signaling cascade leading to changes in gene expression, cytoskeletal organization, and cell metabolism.

The nature of the antigen, along with the maturation state of the B cell and the duration of BCR signaling, dictate the outcome of the cellular response. Following a strong response to an antigen, most B cells proliferate rapidly and differentiate into plasma cells to secrete circulating antibodies at high concentrations during acute immune responses. However, weaker responses can result in B cell anergy, or a lack of reaction, which plays an important role in inducing tolerance— thus preventing the immune system from responding to and attacking self-antigens. Still other B cells may become activated by an antigen and retain recognition of it, but remain dormant until they are reactivated upon a subsequent exposure to the specific pathogen. These cells are critical for generating an accelerated immune response in the case of reinfection or following vaccination.

Several markers have been identified that can be used to distinguish between the various stages of B cell development and maturation. Specific antibodies to these markers can be used to identify individual B cell types by immunohistochemistry (for example, in the tumor microenvironment) or to quantify and isolate them from a heterogeneous pool of immune cells through flow cytometry — a process known as immunophenotyping. Some of these markers can be used to identify immature B cells (CD19, CD34, CD45R), mature B cells (IgM, CD19), activated B cells (CD30), and memory B cells (CD40) or all B cells (CD79A). Whether in experimental models or human samples exposed to pathogens or afflicted with blood borne cancers, this process is necessary to understand B cell subtypes under healthy conditions as well as assessing how these populations respond to immune challenge.

Want to see it in action? Visit our interactive B cell receptor signaling pathway to learn more!