Who am I: Can a cellular identity crisis lead to cancer progression?

Who am I: Can a cellular identity crisis lead to cancer progression?

Using innovative electron microscopy techniques, Hay made the surprising discovery that epithelial cells in the primitive streak of the chick embryo underwent what appeared to be “reverse” development, challenging the widely-held belief that differentiation could only ever proceed in one direction. The “dedifferentiation” of these epithelial cells resulted in their transformation into motile, spindle-shaped cells which subsequently migrated away from their site of origin and contributed to the morphogenesis of distant tissues. Painstaking studies by Hay and others subsequently revealed that this remarkable display of phenotypic plasticity, termed by Hay as “epithelial-to-mesenchymal transformation”, is a critical and nearly universal feature of animal development[1]. 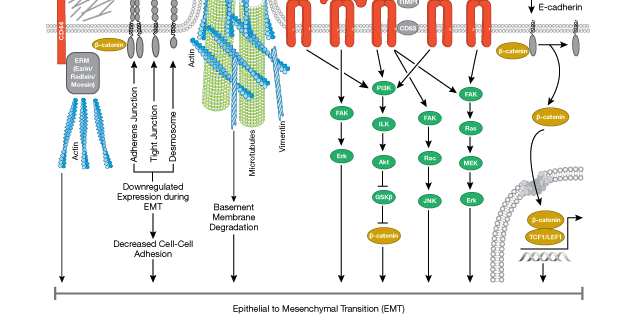 Cells undergoing EMT exhibit a suite of phenotypic changes, with many now considered to be hallmarks of the EMT process [19487818]. These include loss of apical-basal polarity, depolarization of the actin cytoskeleton, and the disassembly of junctional complexes that connect the cells to their neighbors. The emergent mesenchymal cells adopt a distinct morphology, interact with their neighboring cells or substrates primarily through focal adhesions, and exhibit motile behavior, facilitated through interactions with constituents of the extracellular matrix.

Biochemical and genetic studies have since revealed that these phenotypic changes are associated with alterations in the expression of specific genes governing cellular phenotype. For example, increased expression of a suite of transcriptional repressors (e.g,. SNAIL, TWIST, ZEB1) leads to downregulation of the expression of cell adhesion proteins (e.g., E-Cadherin, Desmin) required for the maintenance of an epithelial phenotype. Likewise, there is an upregulation of selected genes associated with mesenchymal identity (e.g., α-SMA, Vimentin, FSP1/S100A4), along with increased expression of extracellular matrix-associated factors (e.g., fibronectin, vitronectin) that promote or facilitate cell migration. Expression of the above-mentioned EMT transcription factors typically follows upstream activation of extracellular and/or intracellular signaling pathways, many of which are recognizable for their central importance in normal animal development. Foremost among these are the TGF-β, Wnt, FGF, and Hedgehog pathways, acting through classical intracellular signal transduction cascades (e.g., ERK, MAPK, PI3K/AKT, Ras, SMADs, etc).

The process of EMT has been further categorized into three, contextually distinct subtypes. Type I involves the above-described dedifferentiation events that occur as part of normal embryonic development. Type II involves EMT that occurs during wound healing and the related process of fibrosis. Lastly, type III EMT is the program of dedifferentiation proposed to contribute to the metastatic transformation of tumor cells (18485877). Whilst the concept of cellular phenotypic plasticity during embryonic development was somewhat easier to accept, the dedifferentiation of committed epithelial cells, and the contribution of this process to disease progression as suggested for EMT types II and III, continues to be a topic of considerable debate [26784242]. The latter subtype in particular, described by Hay as perhaps the most ‘fearful’ manifestation of EMT [8714286], has arguably been subject to the most vociferous debate since EMT was first described [27042694].

So, does this cellular identity crisis indeed play a role in cancer progression? The difficulties in observing EMT in vivo have long hampered efforts to demonstrate this conclusively. It has furthermore been argued that metastases typically replicate the phenotype of their site of origin, necessitating directed redifferentiation from mesenchymal back to an epithelial state. Such transient, reversible and yet partially controlled plasticity is considered by some to be unlikely, considering the genetic and/or epigenetic disruptions that likely led to initial tumor formation (23201165). Other studies have either failed to induce tumor metastasis following controlled induction of EMT, or have observed metastasis in the absence of canonical EMT gene expression, leading to the conclusion that EMT is not a prerequisite for metastasis to occur (26560033).

Recent studies by the Weinberg lab however, may have shed some light on why some approaches have failed to support the EMT-metastasis connection. Kröger et al. (2019) demonstrated that the tumorigenic potential of breast cancer cells is maximized when they occupy an intermediate “hybrid” state between the boundaries of epithelial and mesenchymal identity (30910979), whereas complete mesenchymal induction substantially reduced tumor-initiating potential. Even more provocative are the observations, reported by Dr. Weinberg at the 2019 American Association of Cancer Research (AACR) Annual Meeting, that cells in this “hybrid” (E/M) state may be more effective at evading immune detection, thereby further enhancing their tumorigenic potential.

It is clear that much remains to be learned about EMT and the progression of diseases such as cancer and fibrosis. Building upon Betty Hay’s transformative discoveries, scientists hope to one day leverage our understanding of cellular phenotypic plasticity to develop ever more effective therapeutic strategies.

Learn more about EMT signaling with our interactive pathways. 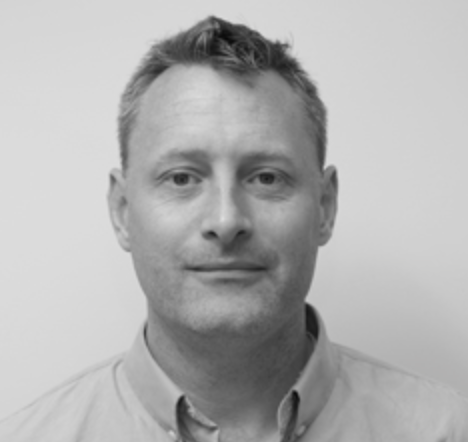 Antony (Tony) Wood is the Director of Antibody Discovery and Product Development in Cell Biology. The passion palate of this Canadian transplant includes cycling, adventure travel, and any food involving hot peppers.