As a result of this research, it is now known that G3BPs tether the tuberous sclerosis complex (TSC) to lysosomes and suppress signaling by mechanistic target of rapamycin complex 1 (mTORC1). This finding is significant since mTORC1 hyperactivity has been linked to diseases typified by cellular overgrowth, migration, and neuronal excitability. G3BPs may therefore be important therapeutic targets for cancer and neuronal disorders.

Because all CST antibodies are rigorously validated according to the Hallmarks of Antibody Validation™, the researchers were able to efficiently achieve clear results. These included confirmation of a physical interaction between G3BPs and the TSC complex, and thorough investigation of mTORC1 signaling. 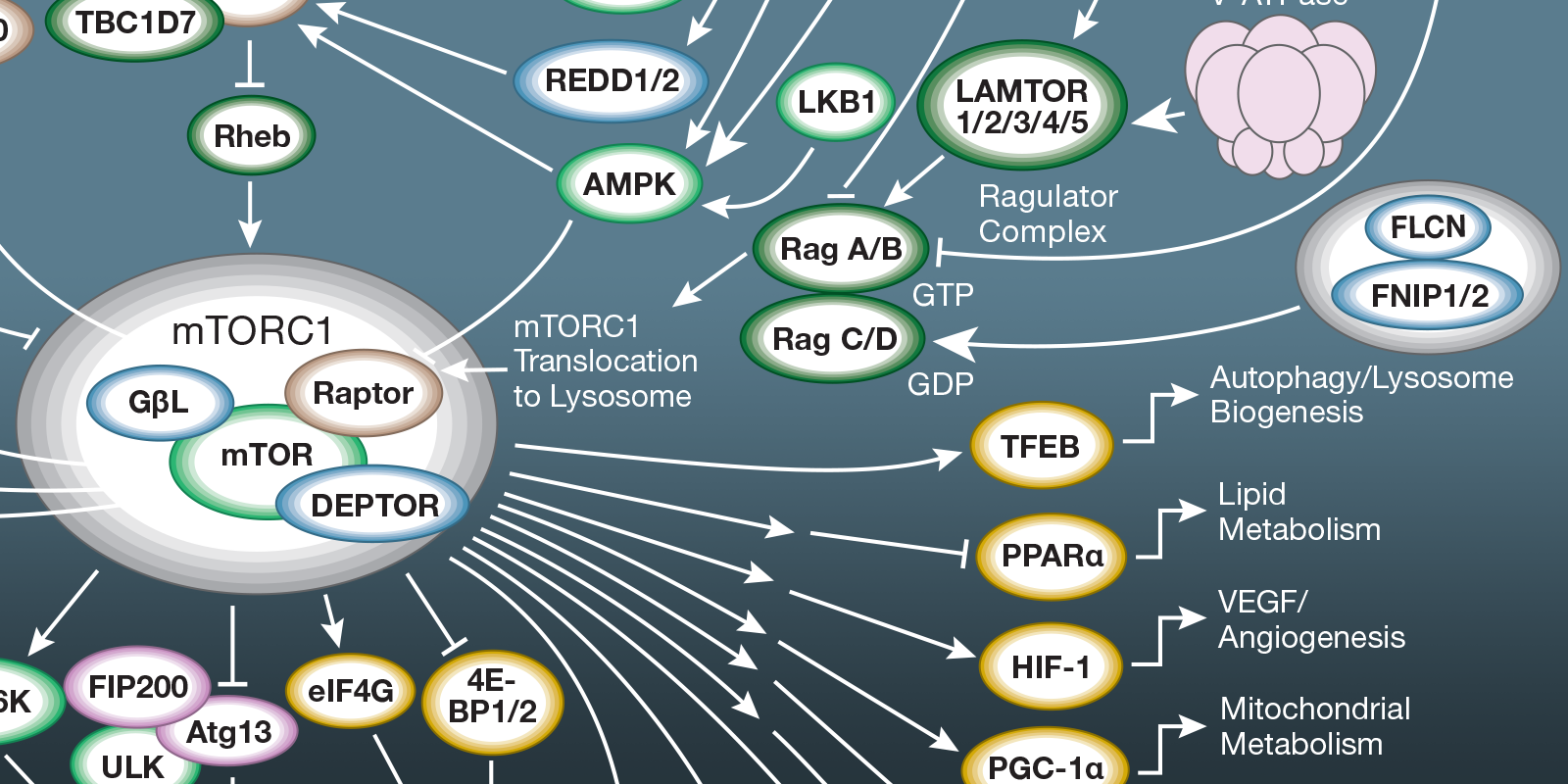 Although SGs are known to inhibit mTORC1, the involvement of G3BP1 in this process has, until now, been unclear. To address this, mTORC1 activity was compared between MCF-7 cells treated with arsenite to induce SGs, and cells cultured under conditions unassociated with SG formation.

As expected, arsenite enhanced phosphorylation of the mTORC1 substrate ribosomal protein S6 kinase B1 (RPS6KB1) at T389 (RPS6KB1-pT389). However, arsenite treatment had no effect on RPS6KB1-pT389 levels in G3BP1 knockdown cells, indicating that G3BP1 does not affect mTORC1 activity in cells containing SGs.

Combined with other data, these results verified that mTORC1 inhibition by G3BP1 occurs in the absence of SGs and indicated an additional role for G3BP1 besides that of being a core SG component.

G3BPs Reside at the Lysosomal Surface

A series of studies showed that while G3BP2 can substitute for G3BP1 in SG assembly, it cannot compensate for its loss; G3BP2 does not suppress RPS6KB1-T389 hyperphosphorylation in G3BP1 knockout cells. This finding contributed to the conclusion that G3BPs form a heterocomplex, prompting further investigation to identify the subcellular compartment where these proteins act to inhibit mTORC1.

Co-immunoprecipitation (co-IP) studies and proximity ligation assays (PLAs) subsequently demonstrated a physical interaction between the G3BPs and the TSC complex. Importantly, this work showed G3BP1 knockout cells to have a similar phenotype to cells exhibiting a TSC2 deficiency, being enlarged and displaying enhanced lysosomal localization of mTOR upon starvation.

G3BP1 has significant therapeutic potential for diseases characterized by mTORC1 hyperactivity. In the publication, it was noted that relapse-free survival (RFS) of individuals with breast cancer is shorter where G3BP1 mRNA or protein levels fall below the median, a finding that aligns with the shorter RFS in patients with low TSC1 or TSC2. Exploiting G3BP1 may therefore increase patient survival rates, for example by preventing metastasis or slowing tumor growth.

Additionally, the publication reported that inhibition of zebrafish G3bp1 has been shown to enhance mTORC1 activity, as evidenced by phosphorylation of ribosomal protein s6 at serine 235/236 (Rps6-pS235/236). Where such inhibition takes place in vivo, it phenocopies the mTORC1-dependent effects of Tsc2 loss on brain function, emphasizing the critical role of G3bp1 within nervous system development and activity. This highlights the possible utility of G3BPs in treating neurological disorders.

To learn more about how CST antibodies were used to study G3BPs and reveal how these essential proteins might be targeted to treat cancer and neuronal disorders, read the full article here.