The ability of cells to recognize external signal cues (ligands and nutrients) and appropriately respond to a rapidly changing environment involves crosstalk among major cellular signaling networks (1-2). These complex pathways sense intracellular nutrients, metabolic flux, and stress and integrate these distinct signals through numerous downstream effectors (1-2). As a scientist, I find trying to understand the intricate nature of pathways (where they overlap and intersect) to be an interesting puzzle to tease apart.

Among the many interwoven signaling pathways, the one that I am most passionate about is the PI3K/Akt signaling pathway. My name is Srikanth Subramanian. I am a Senior Product Scientist at Cell Signaling Technology and I am part of the team that prepares and manages all of the PI3K/Akt antibodies as well as some downstream pathway targets. So, I may be a bit biased but my involvement with PI3K/Akt signaling started even before my time at CST, as a graduate student, and continues today. Studying and working with targets in the signaling pathway over the years has enabled me to create lasting friendships on a personal level and collaborations on a professional level, generate lots of great memories, and has helped provide me with a career. PI3K/Akt signaling is also close to my heart because I’ve come to notice that certain diseases that have cropped up in my family are linked to specific proteins in this dynamic pathway. I’ll talk more about some of these proteins and the personal connection to my family members.

The PI3K/Akt Pathway promotes metabolism, proliferation, cell survival, growth, and angiogenesis in response to extracellular signals (1-2). This is mediated through serine and/or threonine phosphorylation through a range of downstream targets (2). The pathway has been the focus of countless studies in a wide variety of fields in biology and medicine (1). There has been much progress in our understanding of the upstream regulatory inputs into AKT (PI3K), and key multipurpose downstream signaling targets (GSK3, FoxO, mTORC1), that expand the functionality of AKT, which is ubiquitous to almost every cell and every organ system (1). Our understanding of AKT regulation and its functions is extremely important given the effect of AKT signaling action in various pathologies, including but not limited to cancer, insulin resistance and type 2 diabetes, autoimmune disorders, and neurological disorders (1-3). 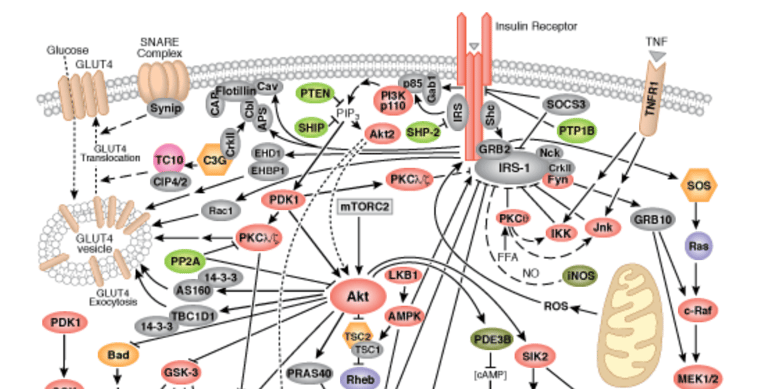 Type 2 diabetes (My Aunt and My Grandmother)

Insulin receptor (InsR) is a heterodimeric membrane receptor tyrosine kinase, consisting of two extracellular α-subunits (containing the ligand binding domain), and two β-subunits (containing an extracellular domain, a transmembrane domain, and a cytoplasmic tyrosine kinase domain), linked together by disulfide bonds (4-8). The physiological roles of the long (InsR-β) and short (InsR-α) isoforms continue to evolve but appear to be determined by different binding affinities for insulin-like growth factors (IGFs), IGF-II in particular (5-7). IR-α is predominantly expressed during prenatal life where it enhances the effects of IGF-II during embryogenesis and fetal development (6). Notably, it is also expressed in adult tissues, especially in the brain. InsR-α increases sensitivity to IGF-II and to insulin (5-7). IR-β, on the other hand, is predominantly expressed in well-differentiated adult tissues, (including the liver, muscle, adipose tissue, and kidney), where it enhances the metabolic effects of insulin (5-6).

Insulin is an important manipulator of energy homeostasis in the human body (8). Impairment in the control function of insulin disrupts energy balance, leading to disease such as type 2 diabetes (8-9). The control of target cells is initiated by the activation of the insulin receptor (IR) at the cell surface and cascades to different cellular processes, such as glucose uptake (via glucose transporter GLUT4) and protein synthesis, through an intracellular signaling/ network, including PI3K and Akt (8-9). In Type 2 diabetes mellitus, the defective expression or translocation of GLUT4 to the peripheral cell plasma membrane impedes the entrance of glucose into the cell for energy production (9).

Breast Cancer (2 of My Aunts)

Normal mammary development is controlled by a variety of hormones and signaling pathways (3, 10). These include estrogen receptor (ER) signaling, HER2 signaling and canonical Wnt signaling, CDKs (Cyclin dependent kinase), Notch, Sonic Hedgehog (SHH), PI3K/Akt/mTOR, and others (3,10-11). The PI3K/AKT pathway is the most frequently enhanced oncogenic pathway in breast cancer (3,10). PI3K (phosphatidylinositol 3-kinase) consists of two domains: a catalytic domain P110 and a regulatory domain P85 (3,10). Among mechanisms of PI3K enhancement, PIK3CA gene mutations (that encode for P110a) are most frequently observed, along with protein loss of PTEN, a phosphatase that normally acts on substrates of PI3K to reverse its activity (3). In addition to PIK3CA mutations, there are many other molecular changes that can enhance PI3K activity, such as HER2 (human epidermal growth factor receptor 2) amplification, dysfunction of PTEN (Phosphatase and tensin homolog), and AKT1 (one of three AKT/PKB isoforms conserved in mammalian genomes) activating mutation (3,10-11).

The PI3K family is classified into three distinct classes (I, II and III). Class I is most relevant to cell growth and survival and includes four isoforms: α, β, δ, and γ (12-13). PI3Kδ, and γ expression is largely limited to leukocytes, while PI3Kα and -β are ubiquitously expressed (13). PI3Kα is the primary isoform required for insulin signaling that has also been identified in various lymphomas indicating a role for PI3Kα in lymphomagenesis (13-16). PI3Kβ isoform helps to regulate formation/stability of integrin and is required for platelet activation (6-8). PI3Kδ and -γ regulate leukocyte trafficking and cell proliferation (13-16). In B-cell non-Hodgkin’s lymphoma (NHL), a combination of PI3Kα and -δ inhibition is required for suppression of phospho-AKT, and downstream NF-kβ and PI3K pathway targets (13-16).

Lung injury can occur via various mechanisms, but all share uncontrolled and progressive fibrosis (17). Type I collagen is predominantly found in human lung fibrotic tissues (17). Under normal physiological conditions, when lung fibroblasts interact with type I collagen extracellular matrix (ECM), PI3K/Akt activation is inhibited by PTEN, leading to inhibition of fibroblast proliferation and stimulation of apoptosis (17). Idiopathic pulmonary fibrosis (IPF) fibroblasts have heightened PI3K/AKT activity due to PTEN suppression, causing IPF fibroblasts to be highly proliferative/apoptosis-resistant on collagen matrix (17).

Glycogen synthase kinase-3 (GSK-3) is a cellular serine/threonine protein kinase that regulates multiple cellular processes including proliferation, differentiation, and adhesion of cells (18-19). Two isoforms of GSK-3 have been identified, GSK-3α and GSK-3β, that are ubiquitously expressed throughout the brain (18). GSK-3 is regulated through Akt activation. The activity of GSK-3 is dependent on phosphorylation at specific sites; phosphorylation of Ser9 of GSK-3β, or Ser21 of GSK-3α, inhibits activity, while phosphorylation of Tyr216 on GSK-3β and Tyr279 on GSK-3α increases activity (18-19).

GSK-3 dysregulation is implicated in the pathogenesis of diseases including Alzheimer's disease (AD) and Parkinson's disease (PD) (18-19). GSK-3 interacts with tau, β-amyloid (Aβ), and α-synuclein, which have been investigated for their involvement in neurodegenerative disease for many years. Aβ production is controlled by GSK-3, and its toxicity is mediated by GSK-induced tau phosphorylation and degeneration (19). α-synuclein is a substrate for GSK-3. GSK-3 inhibition protects against Parkinson’s-associated toxins (18-19).

The family of forkhead box class O (FoxO) transcription factors are involved in metabolism, apoptosis, oxidative stress resistance, and senescence (20-21). In mammals, there are four FoxO proteins, FoxO1, FoxO3a, FoxO4, and FoxO6. FoxO1, FoxO3, and FoxO4 are widely distributed and are expressed in a vast range of tissues, whereas FoxO6 expression is mostly in neural cells (1-2,21). When active, FoxO1 and FoxO3a are nuclear proteins, but with Akt activation, FoxO1 and FoxO3a are phosphorylated, become inactivated, and are shuttled to the cytoplasm (20-23).

FoxO family members play critical roles in immunoregulation, although their function may be widespread and sometimes contradictory (20-21); FoxO1 can activate NF-κB but FoxO3a and FoxO4 may play an inhibitory role in autoimmune and inflammatory diseases by repressing NF-κB activity (21-23). In Systemic lupus erythematosus (SLE), lymphocyte activation/hyperactivity is regulated by FoxO1 signaling downstream of the T cell and B cell receptors, and drives immunopathogenesis (20). FoxO3a is down-regulated in the course of SLE (21). 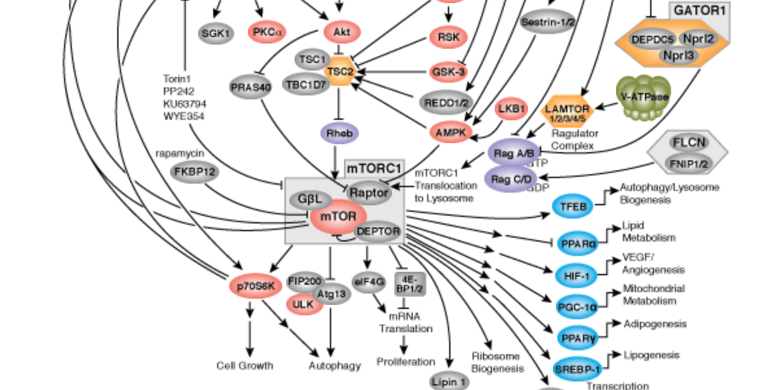 The mammalian target of rapamycin (mTOR) is a conserved serine/threonine kinase which has a central role in the regulation of cell growth and metabolism (24). mTOR can be incorporated in mTOR complex 1 (mTORC1) or mTOR complex 2 (mTORC2); the components of each complex are similar in structure but distinct in function (25). mTORC1 is a major link between nutrition and metabolism- sensing nutrients, growth factors, and environmental stresses (24-25). mTORC2 is involved in the expression and activation of Akt (25).

The continuous activation of mTORC1 results in the dephosphorylation of Akt, which suppresses the feedback of mTORC1 (25). In this way, mTORC1 is both a down-stream activation target of Akt as well as a pathway inhibitor via negative feedback effects on Akt (1,24-25).

Given the broad reach of PI3K/Akt signaling, it is not surprising that Akt plays a central yet diverse role in the response of various cell types and tissues to a wide range of stimuli (1-2). But it is important to keep in mind that the PI3K/Akt pathway is an integral part of larger signaling networks and all signaling is contextual and dynamic (1). In terms of pathology, research scientists and medical professionals are playing a signaling version of the board game Clue, everyday -who’s the pathological culprit, using what target signaling mechanism(s), in which cells or organ systems.

Scientists need (new) tools to help them unravel details of the networks to better understand the mechanisms of PI3K/Akt signaling on an intricate level. This is where Cell Signaling Technology fits into the puzzle. The mission of our company is to make the most relevant, useful, and reproducible products for cancer and translational research. We strive to provide reliable signaling tools to the scientific community in order to help researchers manage and manipulate these signaling networks to hopefully one day treat the diseases that affect so many of the loved ones in our lives.