Depending on the antigenic target being studied and the application being used, it may be advisable to employ complementary strategies during antibody validation. These approaches can provide vital information regarding antibody specificity or functionality and can be carefully tailored to the biological nature of the target as well as to the exacting requirements of the downstream assay. 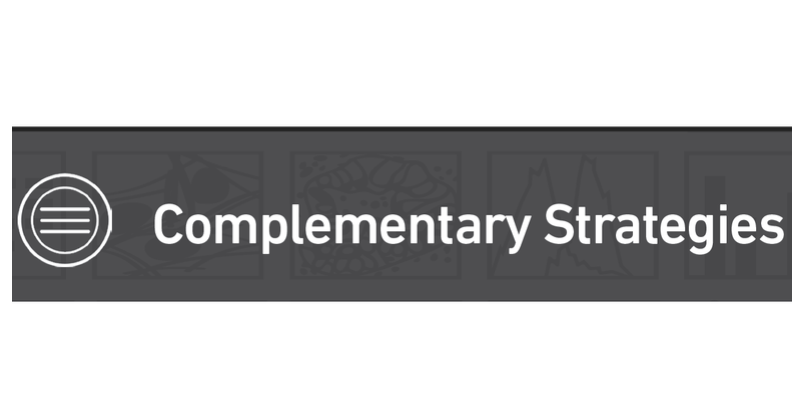 Complementary strategies include the use of peptide arrays and/or ELISAs to determine the specificity of an antibody for a post-translational modification (PTM), and various peptide blocking methods to prevent antibody binding to a defined antigen. Protocol optimization is also included within the complementary strategies hallmark, as are various functional assays such as neutralization or protein activation using an antibody as an agonist. All these methods provide additional data to support results generated using the other hallmarks of validation.

PTMs such as phosphorylation, acetylation, methylation, ubiquitination, and sumoylation are major sources of protein variation. Since the number and types of PTM present on a protein may dictate both structure and function, researchers require highly specific antibodies to detect and quantify these modifications.

Primarily used to validate antibodies against histone modifications, as well as antibodies against other PTMs, peptide arrays and competitive ELISAs are useful tools to determine PTM specificity and to assess the impact of proximal modifications on the specificity and sensitivity of an antibody. By providing the capacity to evaluate multiple PTMs simultaneously, these systems rapidly provide large quantities of valuable multiplex data.

Arrays of modified and unmodified histone tail peptides can be used to validate antibody specificity. This is illustrated in Figure 1, which shows the use of such an array to screen the Mono-Methyl-Histone H3 (Lys4) (D1A9) rabbit mAb against a selection of peptides and modifications. The results demonstrate that not only does the antibody specifically detect acetylated lysine 4 of Histone H3 but that the presence of nearby modifications (eg, phosphorylation at serine 6) has no impact on antibody specificity or functionality. 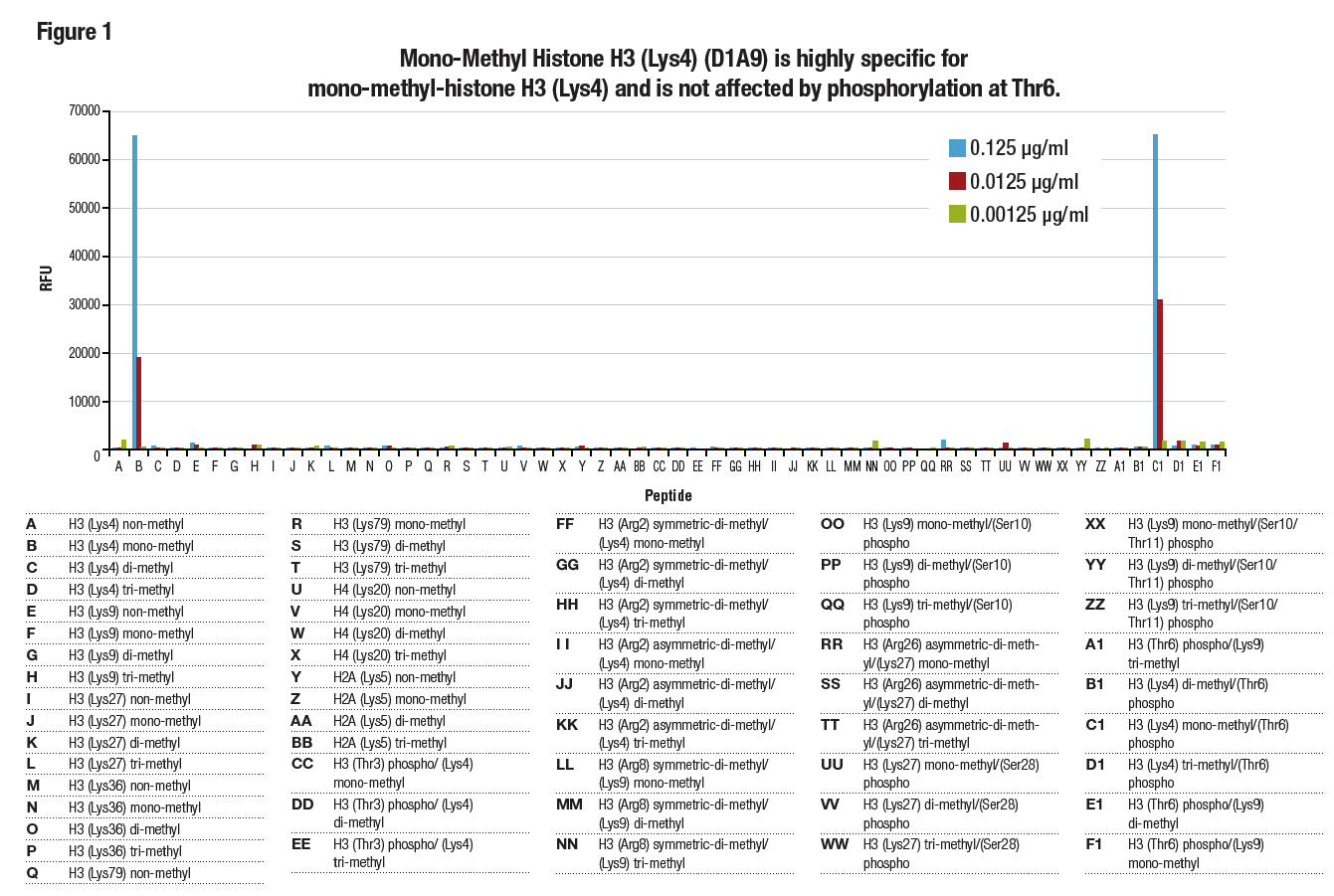 ELISAs are also widely used to evaluate antibody specificity, as shown in Figure 2. Here, a competitive ELISA was used to validate an N6-Methyladenosine (m6A) (D9D9W) rabbit mAb. This was achieved by incubating   the antibody in microplate wells precoated with an m6A oligonucleotide in the presence of increasing concentrations of differentially modified adenosine. The results show that antibody binding to m6A is blocked only by the free m6A peptide, which is indicative of specificity for the target. 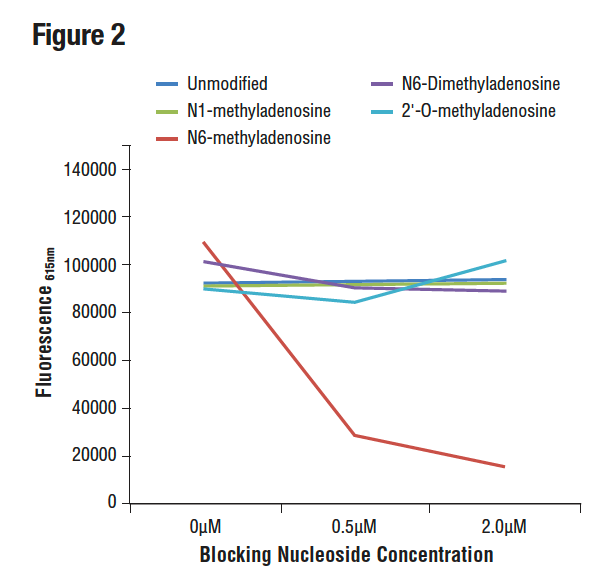 Specificity of N6-Methyladenosine (m6A) (D9D9W) was determined by competitive ELISA. The graph depicts the binding of the antibody to a pre-coated m6A oligonucleotide in the presence of increasing concentrations of differentially modified adenosine. As shown in the graph, antibody binding is only blocked by free m6A nucleoside.

During the validation of antibodies against small molecules or nonprotein targets, it is critical to determine that  the antibody specifically and sensitively binds the moiety of interest without detecting any biosimilars. This is because off-target binding can interfere significantly with any experimental results, rendering any data useless.   In these instances, it is sensible to compare the reactivity of the antibody against both the intended antigen and against other compounds of similar size and shape, for example by running an ELISA.

A simpler approach to an ELISA is to use a dot blot technique where the antibody being validated is screened against samples that have been blotted on to a membrane. This method is frequently used as a complementary strategy to evaluate antibody specificity for a PTM, as illustrated in Figure 3. However, it is important to note that, while dot blots are a quick and easy way to test antibody specificity, the experimental design must always be carefully thought out and well controlled for any data to be relevant.

In this validation experiment, the same N6-Methyladenosine (m6A) (D9D9W) rabbit mAb mentioned previously was tested against RNA from 293T cells in the presence or absence of expression of METTL3, a protein that induces production of N6-Methyladenosine. Antibody binding to the target is clearly influenced by the concentration of METTL3, providing confidence in its specificity for the target.

Despite this, peptide competition does have utility in validating antibodies against PTMs, since it allows direct comparison of a modified peptide to a non-modified peptide. Figure 4 shows evaluation of a Tri-Methyl-Histone H3 (Ly36) (D5A7) rabbit mAb by IHC using this approach. Following antibody incubation with a nonmodified peptide (left) or a tri-methyl-blocking peptide (right), ovarian carcinoma sections were subject to IHC analysis. The results provide supporting evidence that the staining of the antibody is specific for the methyl-modification.

Throughout this series, it has been heavily stressed that no one validation strategy is better than another and that none of the approaches discussed here should ever be used in isolation. Each antibody-based application provides a unique set of conditions, presenting very different challenges relative to antibody specificity, sensitivity, and functionality. As just one example, an antibody that displays exquisite specificity by western blot may be nonspecific in an IHC assay or ineffective in a functional assay. This emphasizes the importance of validating every single antibody using strategies and protocols consistent with the desired application in the intended model system.

At CST, we employ the hallmarks described here to assure confidence in our antibody reagents, indicating those applications in which researchers can expect our antibodies to perform appropriately. Ultimately, it is up to the  end users of our products to ensure that any antibody works in the intended application, protocol, and model system. Taking the time to optimize each experimental system individually is critical to producing precise results that accelerate research.