When performing immunofluorescence (IF), it is common to multiplex with several antibodies and/or dyes to generate information about the protein of interest in relation to other markers. Of all the recommendation requests submitted to the the IF technical support team, the most popular markers mentioned are subcellular markers. 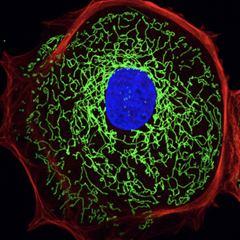 Subcellular markers are high-affinity reagents for organelle-specific components within a cell that can enable your research by providing a clear view of the physical and spatial characteristics of different organelles. There are many reasons to include a subcellular marker in your next immunofluorescence experiment – studying specialized organelle-specific functions, assessing drug effects through organelle health, or examining global changes in a knockout cell.  You may want to use a specific reagent for the protein of interest in your experiment and also want to include a reagent to determine subcellular localization. However, not all reagents are universally compatible. Reagents can perform differently depending on the model species and staining protocol. This guide has been designed to help you find the subcellular marker that fits your experimental needs.

For the purpose of this experiment, we have focused on five major subcellular localizations: cytoskeleton, mitochondria, endoplasmic reticulum, golgi, and nuclear envelope.

There are several localizations which have been omitted here either because they have very specific markers (e.g. early endosomes with Rab5 or centrioles with PCM1)  or there are faster methods to label the localization (e.g. nuclear dyes like DAPI #4083 and Propidium Iodide #4087). 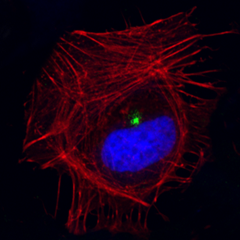 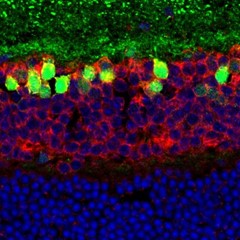 Only ubiquitous markers were considered in this analysis. Reagents evaluated in this experiment were tested in human, mouse, and rat cells using the three main workflows used for immunofluorescence experiments at Cell Signaling Technology® (formaldehyde fixation with Triton™ X-100 permeabilization, formaldehyde fixation with methanol permeabilization, and methanol fixation).

With the goal of identifying the best marker for a given protocol or species, we have compared antibodies within a given localization assessing both protocol and species performance using two criteria: specificity and signal intensity. Performance across species and protocol have been normalized to the best performer within the localization for each class and evaluated on a scale of 0 - 100. This allows us to compare multiple variables in a radar chart (as shown in the plot below comparing beverage traits). 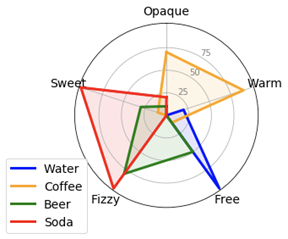 To avoid recommending products that give nonspecific patterns (e.g., nucleolar labeling with a mitochondrial marker) in a specific protocol or species, the product was given a 0 for the class it was evaluated in if nonspecific pattern was observed.

For the purpose of this test, each antibody was tested in triplicate in a single well of a 96 well plate diluted at the recommended dilution in 100 uL of antibody diluent. Incubation of primary antibody was performed at 4°C overnight. Primary antibodies were labelled using host appropriate Alexa Fluor® 488 conjugated secondary (Anti-rabbit IgG (H+L), F(ab')2 Fragment (Alexa Fluor® 488 Conjugate) #4412 or Anti-mouse IgG (H+L), F(ab')2 Fragment (Alexa Fluor® 488 Conjugate) #4408) antibody diluted at 1:500. Incubation of secondary antibodies were performed in the dark at room temperature for one hour. 96 well plates were analyzed by high content analysis including a laser scanning image cytometer to generate MFI data and an automated imager to generate 200X images of DAPI and the 488 channel.

When using cytoskeletal markers, the most experimental flexibility is gained by using a Phalloidin conjugate - a phallotoxin that tightly binds to filamentous actin. Because this is a non-antibody method of labeling, it allows you to conserve host species for other markers. Phalloidin has one downside for use - it is incompatible with methanol permeabilization or fixation. 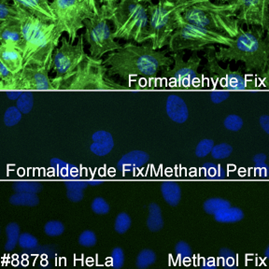 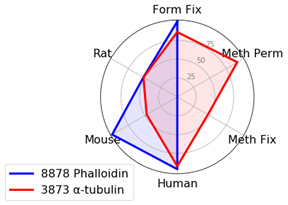 We found that golgi markers favor formaldehyde fixation with Triton™ X-100 permeabilization. However, there is substantial protocol flexibility with GM130 (D6B1) XP® Rabbit mAb #12480 if you are working with human samples. 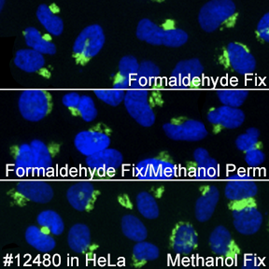 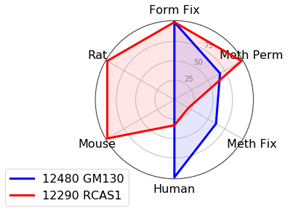 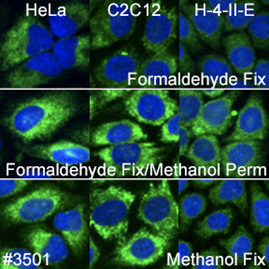 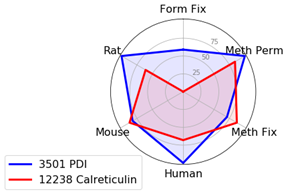 There are many available markers for mitochondria. In house at Cell Signaling Technology®, the preferred mitochondrial marker is AIF (D39D2) XP® Rabbit mAb #5318 due to compatibility with many species and protocols. AIF Antibody #4642 slightly outperforms #5318 in terms of signal; however, we prefer XP® monoclonal antibodies in house. 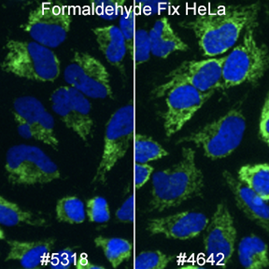 In cases where methanol fixation is necessary and the species is human or rat, COX IV (3E11) Rabbit mAb #4850 may perform better than AIF antibodies. 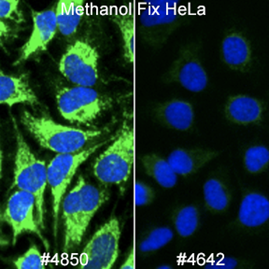 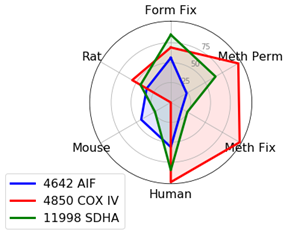 For nuclear envelope markers, there was a clear winner. Lamin A/C (4C11) Mouse mAb #4777 worked in all species and most protocols and gave clear bright signal which was slightly diminished with methanol fixation. 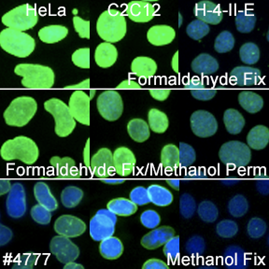 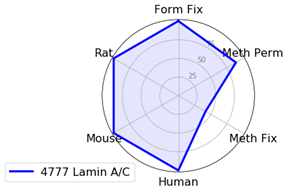 Tips before You Begin

Above we have discussed some of the best performers for each subcellular localization.

As always, the most important factor for experimental success is that samples are treated with care. Consider the health and confluence of your cells before fixation as these factors will impact your experiment. Make certain that your sample is sufficiently fixed and avoid allowing the sample to dry out as this can negatively affect an immunofluorescence experiment. 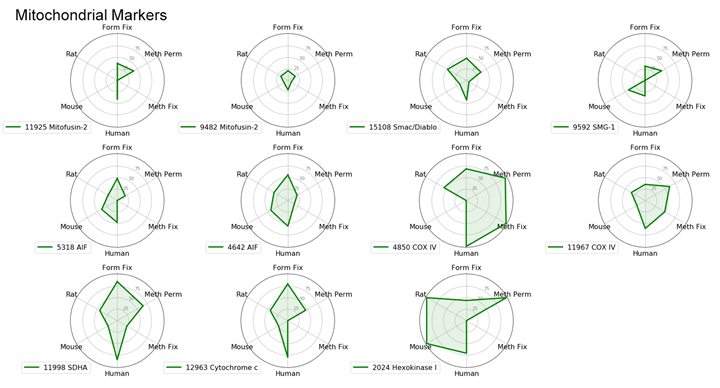 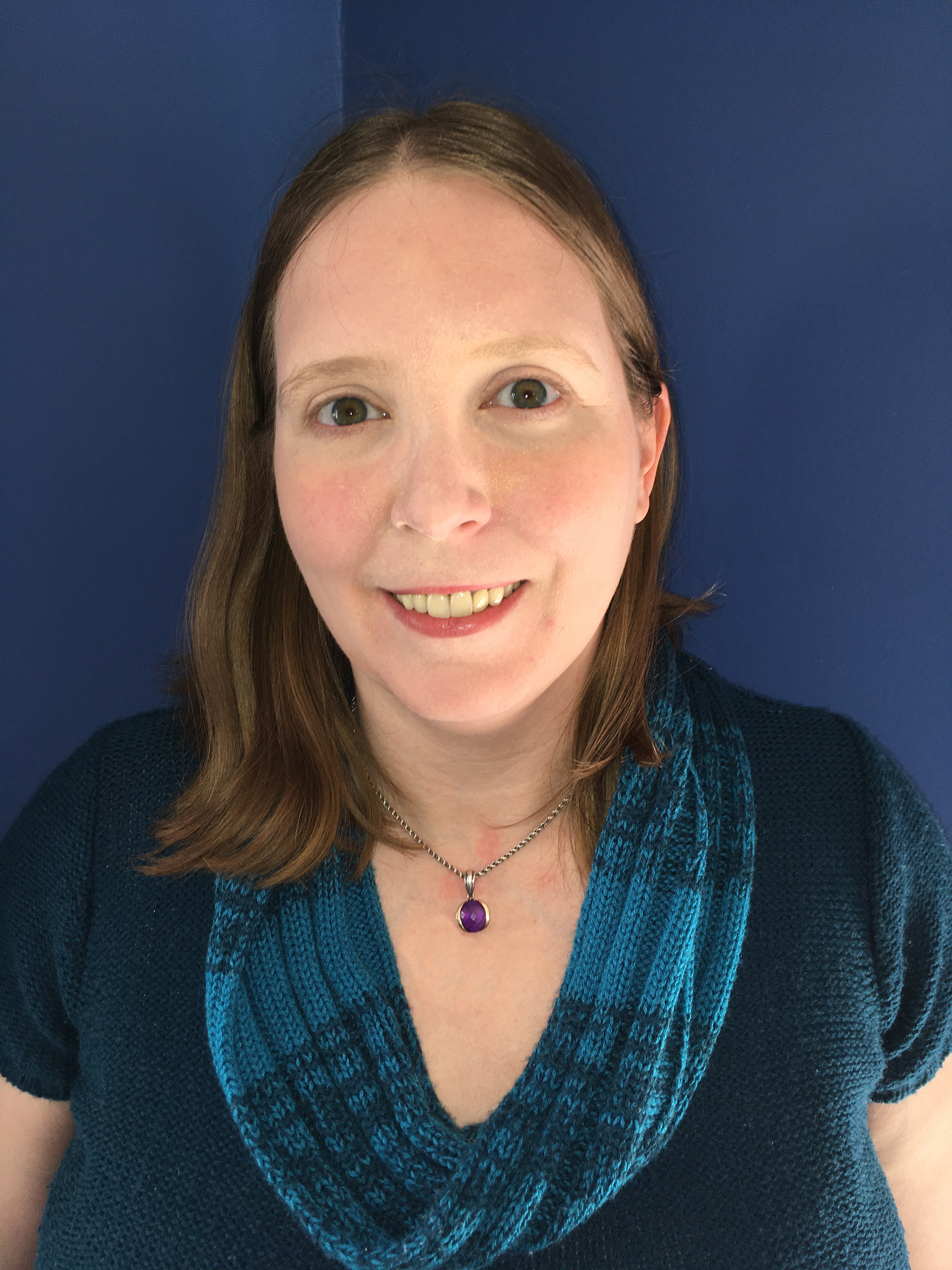