CUT&RUN delivers the power of chromatin immunoprecipitation (ChIP) or ChIP-sequencing (ChIP-seq), only takes one to two days to go from cells to DNA, and can be used with as few as 5K to 20K cells. Like any antibody-based technique, identifying a compatible antibody is a critical part of ensuring assay success. CUT&RUN is a relatively new technique, limiting the number of validated antibodies for the application. Therefore, some companies recommend using ChIP- or ChIP-seq-validated antibodies for CUT&RUN since all three techniques are used to analyze protein-DNA interactions across the genome in cells and tissues.

We understand that you might be wondering if all ChIP-validated antibodies will really work in a CUT&RUN assay? In fact, we have actually found this not to be the case. Let's explore why.

Even though both assays are used to profile chromatin, there are significant differences between the methodologies that can impact antibody recognition (Table 1).

When Stat1 (D1K9Y) Rabbit mAb #14994, which is ChIP-validated, and Stat1 (D4Y6Z) Rabbit mAb #14995, which is ChIP- and ChIP-seq-validated, were tested, both antibodies demonstrated robust enrichment of target genes in ChIP (Figure 1A). Stat1 #14994 did not generate passable data for ChIP-seq, but it did show enrichment in the CUT&RUN assay. On the other hand, Stat1 #14995, which is validated for ChIP and ChIP-seq, did not work for CUT&RUN since there was no observed enrichment for known targets STAT1 target genes IRF1 or AIM2 (Figure 1B). 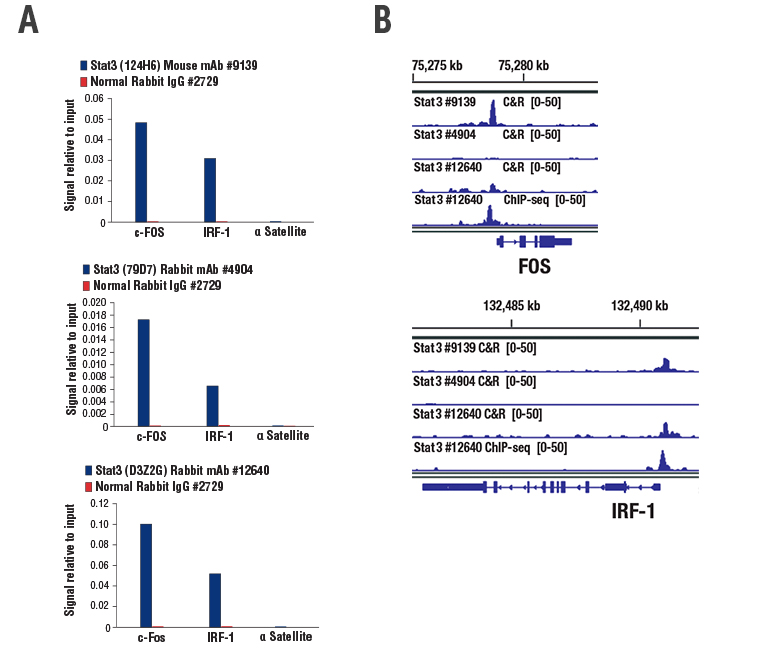 Figure 2. ChIP and CUT&RUN experiments were performed with HepG2 cells starved overnight and treated with IL-60. While all three STAT3 monoclonal antibodies show robust enrichment of target genes in ChIP (A), only Stat3 (124H6) Mouse mAb #9139 shows robust target gene enrichment in CUT&RUN (B). Note that while the ChIP-seq-validated Stat3 (D3Z2G) Rabbit mAb #12640 does show enrichment of target genes in CUT&RUN (B), it failed validation due to high background signal.

To save you time and money that you’d otherwise spend testing antibodies yourself, CST is actively validating CUT&RUN antibodies for you!

How CST Validates Antibodies for CUT&RUN

CST is known for having stringent validation standards to ensure antibodies will work for your application, and it’s no different when it comes to validating antibodies for CUT&RUN. To provide antibodies that are proven to work in CUT&RUN, we test all of our antibodies using the CUT&RUN Assay Kit #86652, the DNA Purification Buffers and Spin Columns (ChIP, CUT&RUN) #14209, the SimpleChIP Universal qPCR Master Mix #8898, the DNA Library Prep Kit for Illumina #56795 (ChIP-seq, CUT&RUN), and the Multiplex Oligos for Illumna (Dual Index Primers) #47538.

Antibodies must pass all of the following criteria to qualify as a CUTRUN-validated antibody:

Using ChIP- or ChIP-seq-validated antibodies for CUT&RUN does not automatically guarantee success since only 50-60% of them are compatible. Before you spend time screening antibodies yourself, be sure to check our ever-growing list of CUT&RUN antibodies validated by CST. You may be able to save yourself valuable time!

Christopher Fry is a Senior Director of Epigenetics, Assays, and Workflow Solutions at Cell Signaling Technology. He is an epigenetics scientist trained at the University of Wisconsin and UMASS Medical Center. At CST, he is helping to develop and manage the epigenetics product portfolio with a specific interest in developing antibodies and antibody-based tools to investigate epigenetic mechanisms in disease.

Protect Your Project: Ensure You Can Get the Antibodies You Need to Keep Moving Forward

It seems that nearly every industry is still suffering from supply chain disruptions that began during th...
Craig T Nov 3, 2022