Dementia is an inevitable burden for many humans, prevailing under a broad umbrella not only in neurological disorders but also as the natural process of aging. Alzheimer’s disease (AD) represents the most common disease with several stages of dementia, which progresses over time. There are no tools or therapies to cure, prevent, or slow the progression of AD.

Few diseases could generate more apprehension and sadness than AD. Well over 40 million people worldwide are estimated to have symptomatic AD, and perhaps two or three times that number may currently be in the pre-symptomatic/asymptomatic phase, many suffering cognitive deficits with a rapid decline leading to the inability to talk, walk, eat, and soon after die of systemic complications. A projected 130 million people will be affected with AD by the year 2050.

Moreover, the economic burden of Medicare and Medicaid alone is projected to be 7.58 trillion dollars by 2050. This disease affects not only patients but also families and care providers, increasing the health and economical burden if a cure or preventive therapies do not improve in the nearby future. AD is a devastating disease that severely affects those in the lower socioeconomic population, which do not have the means to manage this disease, according to economic analysis, suggesting that 2-thirds of this population will be affected with AD by 2050.

Significant advances have been developed to treat some neurological diseases, however, AD therapies are lacking. The ideal approach to treat AD would include the detection of appropriate biomarkers at pre-symptomatic stages of the disease (figure 3), and development of therapies to stop, or significantly slowing the progression of the disease before the cognitive impairment. Thus, the identification of reliable biomarkers represents the ultimate “holy grail” of Alzheimer’s research, which so far remains elusive despite the advances in the field of neurodegeneration. 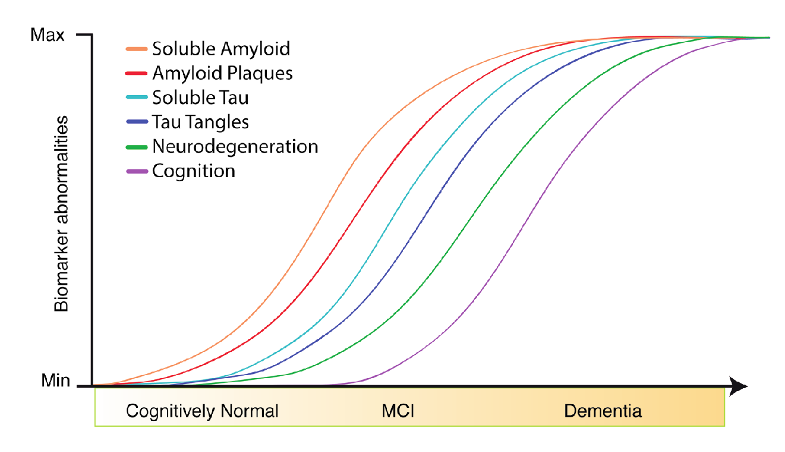 Historically, studying the biological mechanism of Alzheimer's disease has focused on the age-related aggregation of toxic proteins, including amyloid plaques made of amyloid β-protein (Aβ) and neurofibrillary tangles (NTF) made of the tau protein. These deposits mainly affect neurons in the central nervous system; however, the presence of Aβ and tau also affects other brain cells, including microglia and astrocytes.

The effort to find and validate disease-modifying therapies has not yet led to approvable agents, and there is an urgency, and understandable controversy, about how best to achieve this ideal milestone. Thus, the greatest task for scientists is to develop non-invasive and inexpensive systems and approaches to detect biomarkers for AD, focus on tracking patients from very early stages of the disease, and ideally in pre-symptomatic/asymptomatic individuals with a family history of the disease. Having this information will lead to a better therapeutic approach for patients suffering from this disease.

Several pre-clinical and clinical studies have successfully targeted Aβ, by using monoclonal antibodies that trap this protein before it spreads to neighboring neurons, thus stopping the propagation of the pathology. The endpoint from this approach is to measure changes in brain activity by positron emission tomography (PET). In a very recent finding, the FDA has approved Ely Lilly’s Tauvid (flortaucipir F18); a drug that detects aggregated tau in NFT and can be measured by PET in live brains from AD patients. This is a major step towards understanding tau pathology in patients; however, this is a very expensive imaging technique to measure pathological tau in pre-symptomatic and clinically diagnosed AD patients. It is not currently the main protocol to detect changes associated with AD.

On the other hand, it has been proven in many studies that levels of tau and Aβ can be detected in the cerebrospinal fluid, or CSF, from individuals with AD, which increases as the disease progresses, suggesting these proteins can be considered biomarkers for AD. However, CSF collection is an invasive and expensive procedure that cannot be performed regularly in AD patients.

While these techniques represent a valuable approach to detect AD features in patients, it is generally understood that a non-invasive blood biomarker for screening in preclinical stages would be crucial for future therapy, as they are easy to perform in longitudinal studies. This is especially true in the context of AD clinical trials, where the move towards early intervention also presents a problem - reliably identifying participants with a high risk of neurodegeneration and cognitive decline throughout a relatively short clinical trial.